Conspiracies
Communities Topics Log In Sign Up
Sign In
Hot
All Posts
Settings
Win uses cookies, which are essential for the site to function. We don't want your data, nor do we share it with anyone. I accept.
DEFAULT COMMUNITIES • All General AskWin Funny Technology Animals Sports Gaming DIY Health Positive Privacy
110 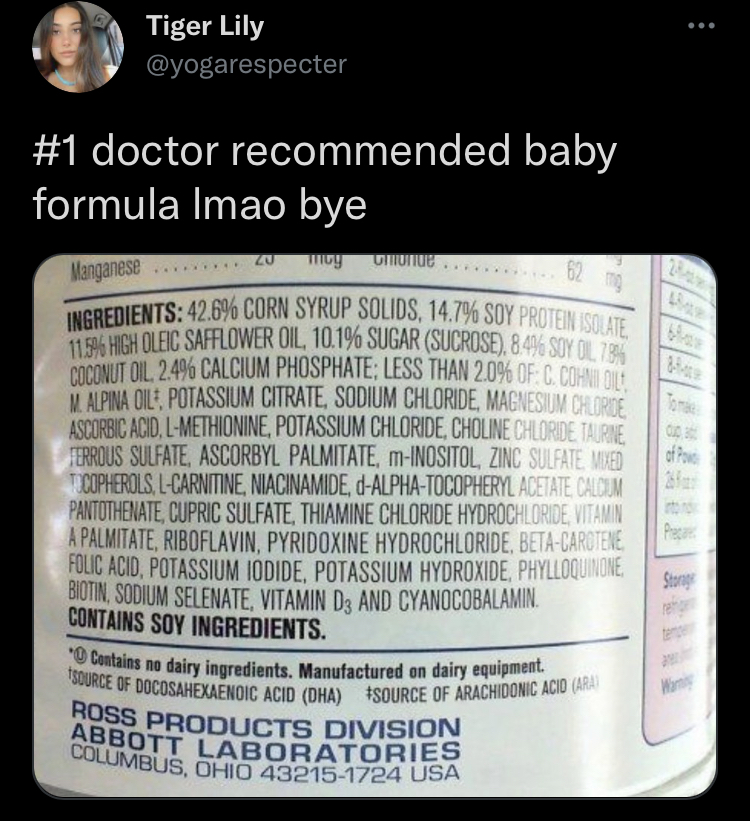 The two most heavily genetically modified substances, that require massive amounts of glyphosate (roundup) to even grow.

They will feed us all this crap from birth now. Humans need to take back the food.

It's a well thought out industry. Feed humans garbage, humans get sick, sell humans increasing amounts of expensive medication as they slowly die.

Only way to eat healthy good tasting food is to learn to be a decent cook. Know the cuts of meat and go to a reputable butcher if you have on in the area, or do your research on the meats that's offered at the grocery store. Support local produce stands if they put out good product. Learn what your body structure is and what macronutrients and how much you need a day. Once you realize this, 85% of your average grocery store is just processed junk that provides no nutritional value what-so-ever, all it does is temporarily suppress your hunger.

Hook them while they're young.

I wonder how many deaths are caused by high sugar diets every year compared to other drug deaths?

Corn syrup is worse than corn. Non gmo corn could have been healthy (if you ever find one crop that has not been contaminated), this is basically poison, they use gmos full of pesticides, and they use an industrial process (with high temperatures etc) to extract the worst part of corn (sugar).

People have been feeding babies soy since what the 80’s with this crap? And we wonder why there are so many weak soy boys?

I honestly dont believe its because of that. in my opinion inceldom, being a sissy, or even becoming gay or trans if you really arent is all about needing acceptance not being able to get it.

I think the world engineered in a specific way in which to totally crush people and give them "consolation prizes". eventually in a life with NO VICTORIES because EVERYTHING A RIGGED SLOT MACHINE. you're not gonna get the status to date the other gender, or the money. you're not gonna get a good job even if you are a genius because you aint in the club, literally all your life you wont have anything and will always lose and will wonder why.

and someone will be like just join us for your consolation prize bro. you dont need to be alone.

and most people. its like buddha said, they can't renounce desire and accept they are what they are and just must be miserable. so they accept the consolation.

over time accepting consolations wears your soul down. you have to start lying to yourself and everyone around you to maintain a semblance of normalcy -- that you ever wanted this. because you really still dont inside but you can't admit the truth and go live an exile totally alone with no work, no friends, no family no nobody.

eventually very few people (like me) decide to exit society as much as possible, and everyone else gets entrenched into this system as the behaviors that nobody feels are normal are normalized around them.

then you're like john the savage smashing the soma machines. all the other slaves get mad at you -- you're taking their momentary happiness away and waking the dark void around them!

they cant handle that. their entire lives are built running from the void that surrounds them, pretending it does not and can not exist.

if the system totally stopped offering consolation prizes to people who obeyed slavery outright, not only would everyone wake up to it as the last bread and circus would be taken from them, but most would go insane actually, being totally incapable of grappling with such critical life errors they'll never be able to look in a mirror again.

its the same reason Normies feel WAYYY more comfortable if its a tyrant than if we have a good leader. They're USED to the tyrants. they WANT their consolation prizes. they depend on it.

Id even say many of them have been domesticated genetically over many years of doing this and only those with like chronic oppositional disorder are capable of maintaining a true sense of self. if you're like that you just smash the consolation prize and walk away with nothing proud.

Highly inflammatory oils. I notice bottle fed counterparts just by looking at them. Plus, their puke and poop smelled horrible compared to breastfed.

Boob milk is the best. Now, assuming that mother doesn’t eat crap either….

Breastmilk is alive. Formula is dead

You know somebody out there probably read all that and thought "Manufactured on dairy equipment? I don't know if that's good for my baby..."

Considering this stuff is made for kids that can't process cow milk, made on the same equipment that processes dairy, does sound stupid.

Who made corn syrup solids their main ingredient? I wouldn't feed my dog that.

Soy based. It's how antifa grows.

And look at that vitamin B they use, it's the cyanide producing form (no, it's not enough to kill, but causes damage.)

It has electrolytes though

That's a shit load of soy, sugar, and corn syrup with some vitamins mixed in to make it "healthy"

Turning boys into girls with all that soy estrogen right at birth, killing all their chances at testosterone.

Let your baby suck your tits like the daddy did when he made it.

This is similac brand. They give it to you free at the hospital and pediatrician! You’ll be discouraged from changing because it “hurts baby’s digestive system.” Then you pay close to $30 per container. They operate like street dealers.

The salt is also cursed.

Added bonus: the babies get type 2 diabetes before they are toddlers!

Over 50%Sugar, plus soy, and a few random chemicals for freshness and voila!

What about the best milk that is free? You know, the one that comes from mother's breast?

They try to start kids on the "American diet of garbage" on the first day!

I had a terrible experience in the hospital when I had my kid 16 years ago. They tried to push formula so hard. They get paid to do just that. It is big business. They want people to get hooked on it and will take the baby for blood work to return with a bottle that they already started feeding them. One way they use is to tell you that you don't have to feed the baby as often and that it keeps them calmer for longer. While this may be true, it is not a good idea to start your kid on a path for diabetes, inflammation, obesity, etc. If you have no valid issues that prevent you from nursing.

They push it by lying about nutrition, giving free formula, vouchers for $300. worth, and even checks. I hope that it is not as bad as it was and that all hospitals do not do this, but the one I was at certainly did.

My hospital roomate was not so lucky, they kept trying to take her son cause he was fussy and grandma wasn't having it. They were condescending and pulled all kinds of psychological tactics to make that woman feel like a bad mother when she repeatedly insisted that she wanted to nurse her own baby. When grandma went to eat, they took the baby to the nursery and gave him a bottle against mother's and grandma's wishes. It was a nightmare and it stresses us all out. I was crying and my mother was pissed off and it wasnt ecen our family. The grandma was so pissed when she returned and raised hell. Good for her!

That was the one time in my life that I feel that the "race card" was well played. It was the only thing that got them to leave that family the hell alone about the stupid formula.

And we wonder where fish mouth syndrome, soy gape & grin, came from...

Christ, you'd probably be better adding lard to cow's milk (not a nutritionist, take me with a grain of salt) to make up for it not having enough fat...

My wife ordered some decent stuff from Germany. It actually wasn't that bad and didn't code much more. Had to buy 6 tubs at a time but he went through it quick. We fed as much natural as possible, also

So carbs and soy…basically corn syrup (sugar- possibly high fructose) soy, table sugar, more soy, crappy seed oil (but not as bad as canola), and a sprinkling of electrolytes and vitamins.

Yep. Let’s make a mixable drink prep for babes that kinda looks and tastes like milk in the cheapest way possible and sell it for as much as possible. Scumbags.

Parents in states actually feed that shite to their babies? Unfathomable! Those people are even fucking dumber than I ever imagined. Jesus!

This has to be the specialty lactose-intolerant version.

I’ve had to order hipp formula from the Netherlands for my 9 month old. It’s excellent quality and not much more expensive than American, if purchased in bulk. Every American formula is soy based and has corn syrup in it. It’s absolutely terrible.

An important tip: if you have to give a baby anything other than human breast milk, raw goat milk it the most bioidentical. Many baby animals like cats, dogs, ect had perfect development from drinking of raw goats/cows milk when their mother died.

Baby formula is designed to harm the physical mental, emotional, and spiritual development of babies. The effects can be prolonged throughout their life.