Conspiracies
Communities Topics Log In Sign Up
Sign In
Hot
All Posts
Settings
Win uses cookies, which are essential for the site to function. We don't want your data, nor do we share it with anyone. I accept.
DEFAULT COMMUNITIES • All General AskWin Funny Technology Animals Sports Gaming DIY Health Positive Privacy
69 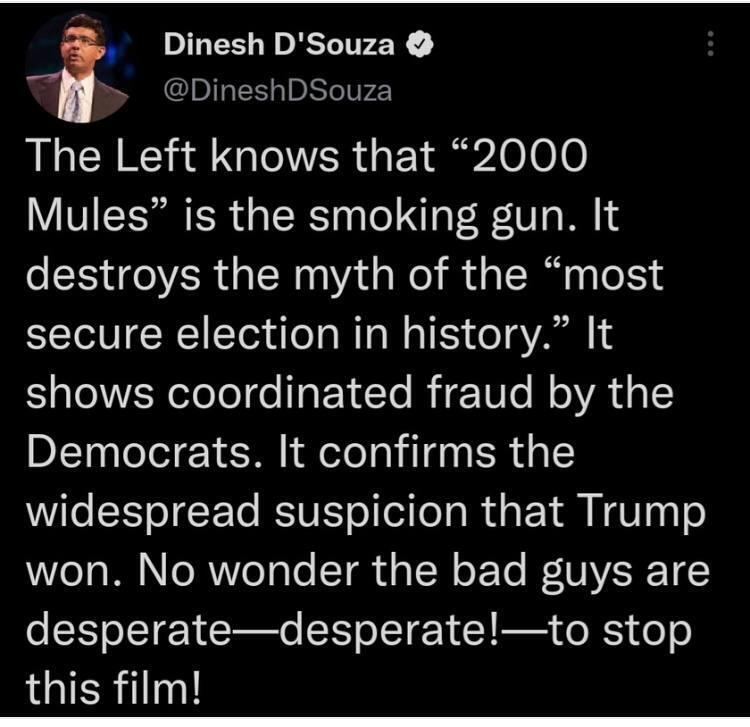 They constantly use believing in what actually happened as something derogatory. There's no hope for them. They're vaxxed, and boostered, and completely oblivious to the world around them.

Meanwhile, hundreds of Trump's biggest supporters still rot in prison while Trump does nothing to help them or even say a single word to help raise awareness of their unconstitutional situation. At the same time, Trump has millions of dollars he raised in donations to help "Stop the steal" and he didn't fight very hard but kept all that money that was supposed to go to court costs... we call that a grift.

He took that money and ran.

Stop pretending that billionaires give a fuck about you. They don't.

Not to mention ignoring the 3 election security bills that crossed his desk well before the election. In fact, he was telling people "the only way the democrats can win is if they cheat" at the same time those bills were being presented. It's almost like he wasn't ever actually concerned with anyone cheating and was just greasing the tracks for his denial.

He was complicit. He enabled the fraud and prevented actual cases from proceeding.

That is pretty disgusting logic. Just because something is a problem does not mean we have to pick from solutions A, B or C. It could well be that none of those things are the right thing to do.

STFU faggot. Why haven't you killed yourself yet? All the women on Earth want you to do it. Get on with it already.

You will never be a woman.

I know. That's because I'm a man. Unlike you, I don't strive to become a woman.

Now, kill yourself like we all want you to do. Thanks, nigger.

True! I piss on people's Wheaties when I tell them that. He was on the DNC's short list of GOP controlled opposition candidates. There is no people's POTUS anymore. ALL are bankers puppets.

Trump never asked anyone to commit crimes. It is the job of the American public to oversee fair treatment of prisoners and especially those unjustly accused or imprisoned. I'm personally pretty unhappy about anyone duped by the feds, but they alone are responsible for their choices regardless of who they support politically.

I'm not sure what you mean by that. In any case, people who donated money to stop the steal intended for that money to go toward efforts to overturn the election and not a legal defence fund for the people who were arrested.

If you are unwilling or unable to be as ruthless as your enemy, do not engage him in combat for you will have already lost

If they were willing to riot and trash cities for months straight all across the country to further their political agenda, the least trump could have done was to call for the sacking of washington DC on 1/6. But instead, he sided with the same corrupt establishment who cheated him out of his reelection. In fact, it goes much deeper than that, but on the surface this is an undeniable fact.

Rioting is not the solution. January 6 was a massive defeat for them.

rioting is not the solution

If it's anything we should have learned from the "summer of love", and the leftists freely admit to this, was that riots work.

1/6 was a massive defeat for them

You know, I was gonna make some snarky comment but now I'm genuinely curious as to how someone could legitimately believe this. Please, do tell how that is the case.

By "them" I am talking about the protestors. Sorry for not being clear.

AKA Bootlicking. This user (SuicideTruthbomber) is a total faggot.

I do not want, and have never wanted, Donald Trump to be President of the United States of America.

It is not his job to take money donated to fight election fraud and spend it on people arrested because of what happened at the U.S. Capitol. He is not responsible for it. If he were to do that, people would see him as being their leader, which he is not. That perception would undermine the very political movement that all of his supporters are a part of.

Reading comprehension is not your thing, huh? He was supposed to spend it on the legal battle that he never waged (because he's a cuck, like you). I said nothing about spending it on people who had been arrested,.

This is why you MUST kill yourself ASAP. You are utterly worthless and a complete waste of skin.

Ah, now I see how you mashed those two things into one paragraph. It is my recollection that he mounted numerous legal challenges and paid Rudy Giuliani to travel around the country to make speeches and hold private hearings. Feel free to inform us otherwise.

Although I don't consider myself a bootlicker, we all know what you like to lick.

He's not done. He'll be back just in time to cattle car our asses.

You are an old, gay Christcuck who thinks the government is spraying poison from the backs of commercial airliners (you know they breathe the same air we do, right dipshit?). So you'll certainly get on that train willingly because you've proven yourself to be extremely ignorant and gullible.

All food, water, and air is poisoned dumbass.

Joos did that...to mankind...they also put your friends balls in your mouth

The link to the complete film is currently pinned to the top of this community forum.

Everyone who watches it will be more knowledgeable. It gets much better 15-20 minutes in.

No. It doesn't matter.

What I dont get about this film...

Why didnt they show footage of the same mule posting in multiple ballot boxes, as they say they can prove happened (and it likely did tbh). They have all this footage, and yet they cant show that cast-iron proof that this video lacks without it.

Sure, a lot of the people filmed looked sus af. Still weird that they cant prove something they should easily be able to, if they were telling the truth.

The person with a gun to your head doesn't care if you have a "smoking gun" proving they are a criminal. Bolsheviks have taken over the government and US military and there is no more legal system, there is no more Constitution.

It's why we have been warning everyone to be prepared, especially with faith in Jesus Christ because you all will soon die and better have your souls prepared to face a holy God. You are not going to "save America," it's long gone.

This documentary changes nothing, period. Dominion voting machine are still out there. Will be used again. Remember the words of sniffer Joe. "We have created the most extensive and inclusive voter fraud organization in the history of American politics." Mark Twain is quoted, "If voting really mattered, they wouldn't let you do it." Stalin said that the votes don't matter. Who counts the votes matters. Thus, this documentary does not matter one iota. Simply a payday for their investors and producers.

Please watch it and then please file a police report with all the "evidence".

what a stupid response lmao

If the movie shows evidence of crimes, the normal thing to do would be to report the crime.

Has anyone done it yet?

election integrity and related crimes are out of local police jurisdiction

report it to the FBI then. Why haven't you?

what good would another report for the fbi to blatantly ignore do? lmao it is cute you think the fbi and doj are acting in the people’s best interest lmao do you honestly believe this recently happened and nothing has been submitted to the proper authorities by anyone? lmao maybe you are dumb enough to believe that maybe you are not lmao

enough of your faggotry.

agree there have been so many instances of kicking the can with this stuff to make people complacent and create an illusion something is being done so no one does anything edit: im not saying it didnt happen but come on trump is not going to save us

You are right of course but the point here isn't about trump. It's about establishing what a sham of a "democracy" we have in this country.

dnesh should go back to india

You should go back to shill school.

Just for that, I just popped some Indian food into the microwave.

In case anybody new here hasn't figured it out, it is important to the people who send shill armies to divide people. The fake racism is to drive people--especially ethnic minorities--away in order to undermine cooperation between otherwise like-minded individuals from various origins. It would be much better for those sockpuppeteers to just have every group think they need social justice and go vote for the political party that claims to care about them.

In this case specifically, it might even be that there is a project to demotivate Mr. D'Souza himself with negativity after the release of his new film. Or maybe, just maybe, a lot of the shills are volunteers who's whole worldview is crumbling as a result of his work and they're lashing out in emotional desperation. Or I could be simply replying to an imbecile, I dunno.