Conspiracies
Communities Topics Log In Sign Up
Sign In
Hot
All Posts
Settings
Win uses cookies, which are essential for the site to function. We don't want your data, nor do we share it with anyone. I accept.
DEFAULT COMMUNITIES • All General AskWin Funny Technology Animals Sports Gaming DIY Health Positive Privacy
3 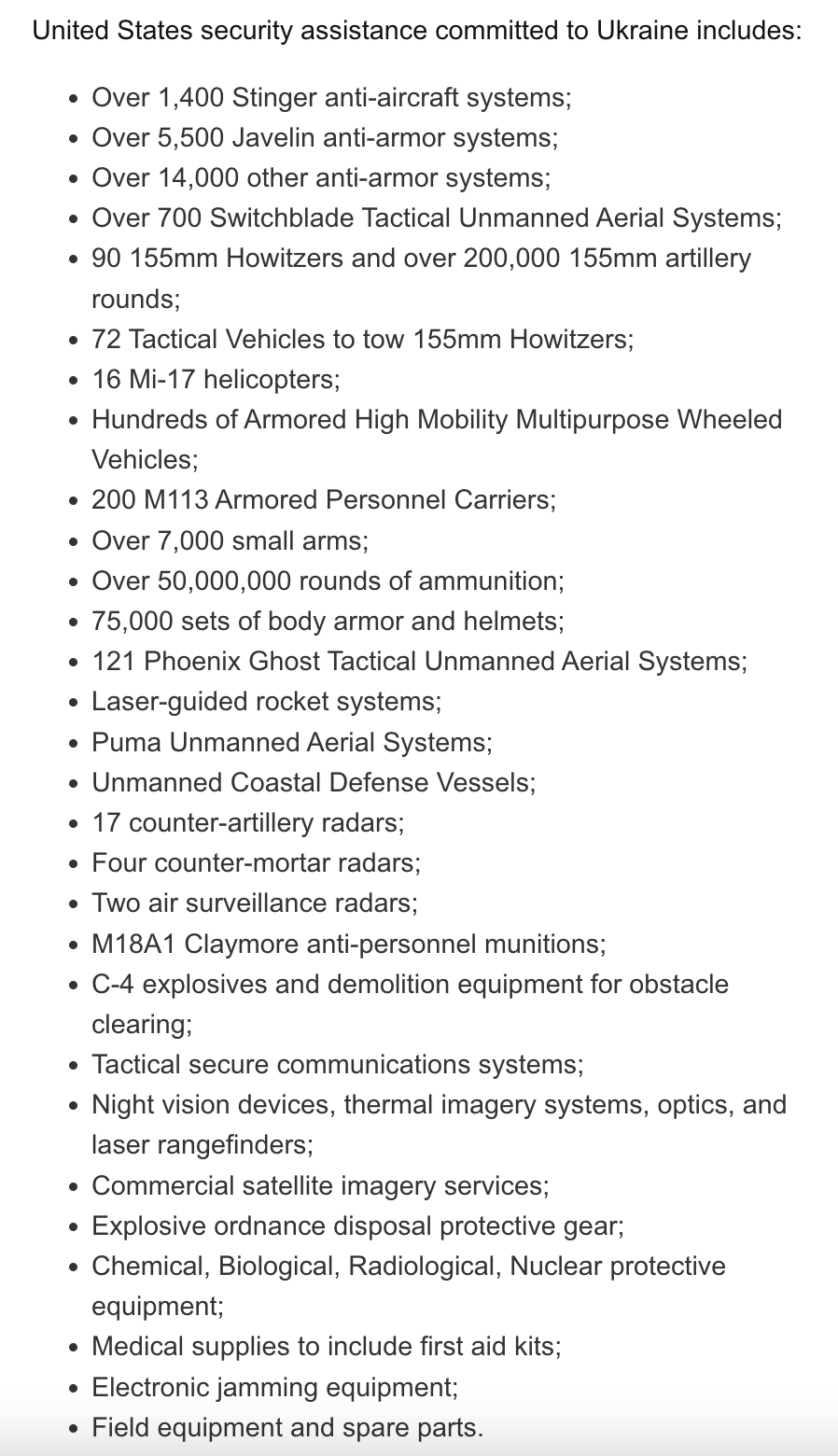 Would've could've should've. Tell me Einstein who are fielding these weapons? Simple question. Last time we checked. Okay. If you give gun to monkey. What happens. Monkey shoots itself. Seriously that concept can be applied to recruits. Veterans are gained how. Where are they? A bunch of new hardware does what? It actually kills far more of them. Simple odds. No experience. Yes they do hold the enemy back, but not very effectively. No experience. Because what occurs is more and more infrastructure and lines and obviously civilian areas get hit.

Until what happens. Who is more at risk off the escalation? Could it escalate into all out war? Could it risk into a tactical nuke. Why not simply stop the flow of arms before all out war which is nuclear anyway?

Obviously you're keener to draft the women. Better protest, much abortions. No?

Who is fielding those arms? If this keeps up, what occurs?

My thoughts exactly. Each of those pieces of hardware comes with a two-inch-thick manual, and unless you've also gone through the requisite month-long course for even basic familiarization, you're more likely to hurt your own troops than the enemy.

The whole op is an obsolete arms dump, just as the Russians are doing. As it turned out with the earlier batches, half the gear is corroded beyond use, but still dangerous to store and expensive to recycle. The solution - stage a conflict, clear out most of the civilians, and hire mercenaries to blast the crap out of the equipment until it's rendered inert. Then leave the local gypsies to process the remains. And in the meantime, laugh at both the "Slava Ukraini" and "Russia Stronk" nimrods online.

Doesn't the lack of training tattle about who's operating the equipment?

Would you recognize a Ukrainian from a Russian if you saw them side by side? Or from any white European, for that matter?

Most likely, the Russian mercs set up the heavy gear - tanks, transports and such - while independent contractors officially working for Ukraine use the man-portable missiles and other small arms, and then either side drops an airstrike, just to make sure.

Now, there are a couple of weird pieces of the puzzle, such as the Chechens and the Azov idiots. I suspect they've been duped into a glow-op aiming to get rid of them in particular, since those are the kind of folks who can turn a perfectly good fake war into a real one.

And I think that's the overall bottom line here. In previous years, obsolete arms would be sold off to warlords in Africa and South America, Asia and the Middle East - where they did real damage, dooming millions of people to dictatorship, slavery, or worse. With a controlled conflict like this one, that can be avoided. And it's for the best - with Iran going nuclear, Brazil getting closer to superpower status, and China increasing its investments in Africa, these regions are no longer "safe" to ignore and treat as weapons dumps and drug farms, like in the Cold War. This engineered conflict, however crude and unconvincing it may be, is a suitable way to address the newly emerging status quo.

I personally haven't paid enough attention to this to be able to know the difference, no. However I have read that the actions in regards to willingness to preserve life is entirely one sided.

If that's true, then analysis will be able to know the difference.

The second those things are dumped into the country Russia just tracks it and bombs the shit out of the depot.

Well, it's escalating. With it bigger risks. Not just to Ukraine, or Russia.. But how far does this go. It hasn't stopped this last decade, sped right up now. At the rates of today. It just gets worse. Tell me exactly what worse means?

Wow, what an incoherent rant. What are you trying to say?

The weapons will never make it into Ukraine, if ever even shipped at all. Why do you “beliebe errythang the gubbamit sez,” fagget?

How retarded do you feel now?

You can't read. I guess not. Look at that skanky tag. It's obviously autistic.

A question, isn't what am I trying to say. I've said it, Moron!

A question ask specifics. What are you specifically asking? Phrase it. By directly suggesting which concept you have struggled with.

Otherwise I am just going to insult you for being dumb. You are dumb. Look at how you talk.

You mean that you are autistic?

Children talk stupidly, they repeat back what you say, because they don't comprehend anything else. They're quite autistic, their brains develop off of adapting, it often means mimicking, instead of actually learning. Learning was the simple suggestion previous. Now I'll just insult you some more. Further, Blocked, because you're not worth it. Far too dumb. Generically inbred tag, generically screams fiction. Who cares what Ukraine can't do? Nobody else. They're happy for more Xmas toys, until they go and break them. Then what happens? More toys, getting broken. No I mean they're gonna win? Keep giving them more toys to break. Sure it worked out in Syria didn't it.

So in other words: the US is now at war with Russia using foreign fighters

jews are making white people kill themselves in war. Same as both the world wars

Play stupid games, win stupid prizes. Vladdie thought he could take Ukraine in 72 hours and all his shills were already celebrating. Look who's laughing now.

Moron, i just can’t understand your purpose. Is it money? Is it for the lulz? Are you a bot?

He's just one of the line items in that aid package. What would it be under... countermisinformation? strategic information deployment? Hilarious that it's just some twit being a twit

Most of the people that go into the fight will be sacrificed.

Happened before, Operation Nightingale was the exact same thing, CIA wasted a bunch of money, weapons and Ukranian lives to harass Stalin back in the late 40's, it was a shameful disaster. I know you don't remember but the Azov boys sure do

the Ukraine forces supply lines are cut off and the airspace above largely controlled by the Russians, how is any of that offloaded mil-surplus junk supposed to reach them?

Nothing you say is true.

Suddenly they don't arrive because of traitorous meddling from the CIA.

It happened with China and Vietnam before. End Result -- whole countries become overran by Communists.

Plenty of US arms have already arrived and are in use.

Now how would you know that for a fact, fagget?

You haven't been following the whole Ukraine thing for very long eh?

Oh yeah ain't it grand? So nice of our military-industrial complexes to help people half a world away kill one another with even more speed and energy. Thanks, uh... Raytheon? Thank the heavens for the brave plutocrats, for who else will stand up to those nasty foreign oligarchs? Somewhere out there, a badnik is getting up to no good, and every second he goes unstopped means that the badniks are winning.

Imagine the letters poor Todd Harmer sends back to his family! "Dear Mum. Russkies less than six thousand miles away. Down to our last few bottles of good brandy. Caviar and gold dust for dinner again. The outlook is bleak: profits to only grow by 186% this quarter. Might have to let the manservant's manservant's manservant go. War is hell!"

POOR TODD! THINK: HE MIGHT HAVE TO WIPE HIS OWN ARSE TONIGHT, BECAUSE THE ARSEWIPER'S ASSISTANT'S RIGHT-HAND-MAN'S "NUMBER TWO" GOT DRAFTED TO GO LOBBYING IN THE WAR!! OH THE HUMANITY! HAVE WE BECOME AS BEASTS? HAVE WE LOST SIGHT OF THAT MOST NOBLE SPARK THAT SEPERATES US FROM THE LESSER CREATURES? WHO MOURNS FOR TODD? WHO MOURNS FOR HIS BANK BALANCE?! IF THIS CONTINUES, HE MIGHT EVEN HAVE TO - AND PERISH THE THOUGHT - SELL AN LAMBORGHINI!!!

That is the end, gentlemen; I am spent! All of my compassion for this decade, used up! Hope Todd's money was worth it.

Wait till Putin gets tired of our shit and nukes a city. THEN the false flag attack can happen on the east coast and get Armageddon going finally.

Putin is crazy but not that crazy

He has repeatedly said, that if he feels Russia is imperiled he'll use nukes.

He also said he had no intention of invading Ukraine. Why on earth would you believe anything he says?

May e you should not follow Russian propaganda Telegram channels?

Will all these be left there too?

According to sources, 3/5 Javelins are duds/misfire when used.

And the problem is that almost all the active Ukr troops in the active fronts that Rus holds, have already been surrounded and have had their supply lines cut off.

The Rus just missile the heck out of the rest.

So in effect, this is:

THat's how the normal DC scam works. Old as the empire.

So Vlad takes 6 beggars who would have eaten 2 kg of rice per week for 40 more years and puts them in a tank. When the Ukrainian Javelin blows them up, the US has an expenditure of $250,000 and Russia saves on the cost of growing 25,000 kg of rice.

Who runs out of Ukrainian / Russians first is the loser.

USA will fight to the last Ukrainian/Polish/German/European.