Conspiracies
Communities Topics Log In Sign Up
Sign In
Hot
All Posts
Settings
Win uses cookies, which are essential for the site to function. We don't want your data, nor do we share it with anyone. I accept.
DEFAULT COMMUNITIES • All General AskWin Funny Technology Animals Sports Gaming DIY Health Positive Privacy
45 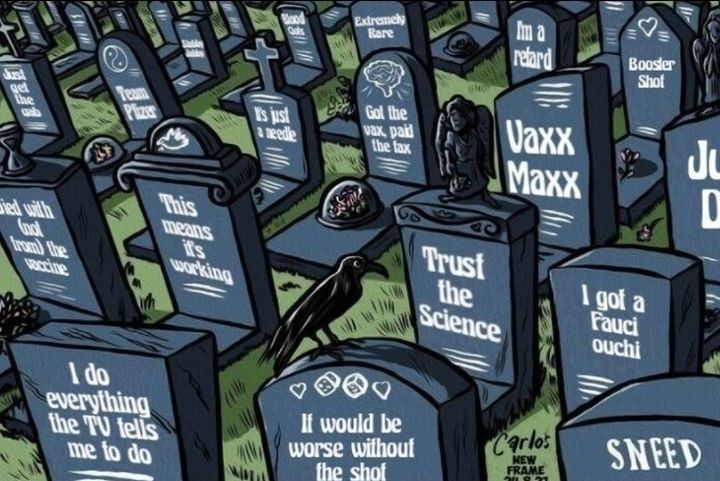 That one made me laugh

At least they don't have covid

three days later in the ICU with covid and pneumonia

her perfectly healthy unvaccinated family that has been taking quercetin zinc and zelenko protocol aren't allowed to see her; and they had to drive 1500 miles because they weren't allowed on the plane either

Then she died. She is survived by 15 cats, a shoddy petunia garden and 2 subaru outbacks, one that works and one that doesn't

yes i am going to hell

Nice picture, but I don't like that "Trust the science" meme widely used by conspiracy theorists.

Really, science is the only thing we could trust. It is only way to find the truth now. It's not the science fault that some bastards call so some crap that in no meaning could be named science. Science does not exist without logic, scientific proofs, sharing results, checking theories with experimentation, control experiments, isolation, independent replication, and other stuff that absolutely necessary to find the truth. All that "consensuses", "models" without experimental proof, inventing new meaning for old words, using censorship as a "proof" and other crap is not the science at all.

Using or being exposed to that meme one could easily throw out the child along with the bath.

At least, in that meme "science" should be in large and clearly visible quotes.

Science has really become a religion. Authority figures tell the general public what to believe, and they unquestioningly accept it as truth.

Science has really become a religion.

Science is a literal opposite of religion. There is nothing in science that you have to believe, Everything should be proved experimentally by multiple independent researchers with full description for anyone who want to check everything by himself, including yourself.

Authority figures tell the general public what to believe, and they unquestioningly accept it as truth.

And how is that about the science? Authorities just lie to public as usual, and that's all. Science have absolutely nothing to do with that lies. If authorities will pose some literal shit as "honey", and some stupid sheeple will began to eat that shit and name it honey, will you stop loving or start to blame real honey for that authorities lie, or will you make memes about stupid shit-eaters saying they "like honey to death" or about how honey smells bad? Hardly. I think you will continue name shit as "shit" and try to bring that simple fact to public.

That's just unconstructive. Real thing will be openly declaring all that authority lies anti-scientific, and that will be absolute true.

I know science is the opposite of religion. But that's how it works for the general public.

There is the scientific method, and then there is "science" the religion with priestly figures telling the public that doing their own research is bad for their health.

It's a legitimate cult now. If you choose not to see it, or call it a "conspiracy theorist thing" because you are so enamored with the word "science" you only sound like one of the cultists.

All dogma is unquestionable. All heretics must be expunged or made an example of. All opposing opinions silenced. And salvation can only be found via the sacrament, those who refuse must be forced. This is their religion, and THEY call it "science."

This is their religion, and THEY call it "science."

They do it constanly with every term you can think of. So, why we, conspiracy theorists, should accept their lie and word juggling in that case? They always pose their lies as "truth", but we do not drop word "truth" and we do not make memes that discredit that word. Science is about questioning everything to find the truth. Discrediting science instead of discrediting authorities who pose some shit as "science" just looks completely wrong and weird way for me. Going that way we will quickly run out of words we can use to fight them.

Every time they name some shit as "science", there is easy and simple way to discredit them. "OK, if that is science, than I obviously can replicate experiments and check everything by myself and if results will be difeerent i can rise an open discussion. Can I? No? That is not a science at all, and that is a solid proof that authorities is a liying bastards that should be dismissed".

Discredit authorities, not the terms they use to lie and manipulate.