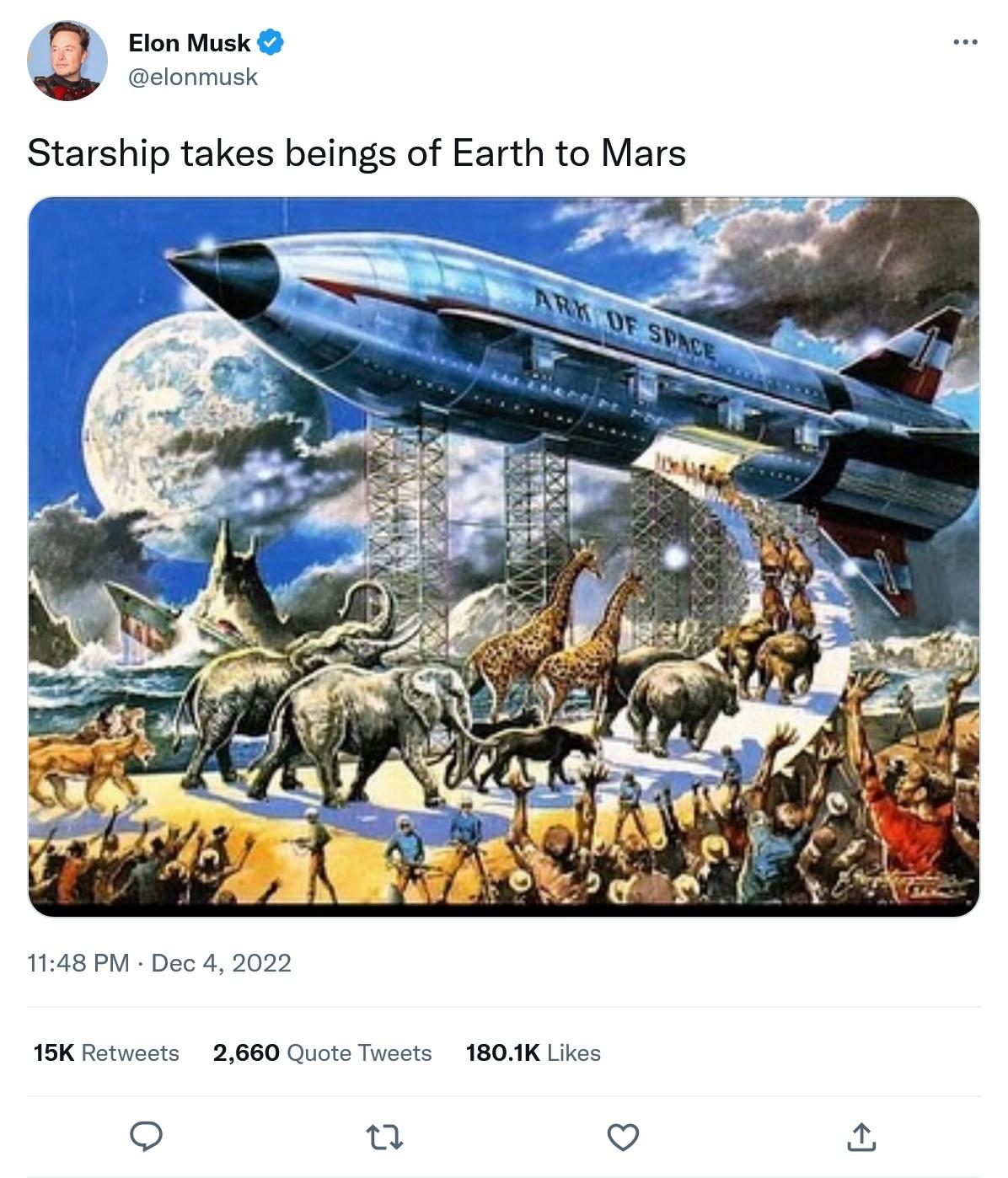 Those are the clowns checking the giraffe’s vaccine passport before boarding the “Ark”. We don’t want to give the Martians covid, right?

Nothing says tyranny like building something and not letting angry mobs take it.

“You know it’s real, because it looks so fake”

It’s an elon quote to excuse/rationalize the outrageous fraud of phony “space footage”, like his tesla orbiting the earth.

So you don't have any proof of FE

What an odd statement. There is plenty of evidence (which can subjectively serve as proof, depending on beholder) for a flat world, though that doesn’t make it so. If you are interested in learning about/discussing/criticizing such evidences - please join us on flatearthresearch!

and instead just make fun of others

If merely repeating something stupid someone (elon) said is “making fun”. Didn’t you yourself remark that it made no sense? Weren’t you making fun of him as well, unknowingly?

Goes on to show, explain or demonstrate NONE of it

Why waste effort to throw pearls before swine, or worse - the disingenuous, disearnest, and/or unwilling? I did invite you, and anyone earnestly interested, to explore the evidence! You ignore the invitation just like you ignore the evidence :(. If you are ever actually interested in such evidence or discussions - you know where to find me and ask your questions!

I understand, better than most, why you think that. However, it is unlikely that you have met an earnest flat earth researcher like myself before. The heavily advertised (i.e. funded) flat earth psyop propagates (and encourages) this false view to suppress the subject. I am against cults, and against psyops. The real question you should be asking is why such an expensive psyop exists to suppress and ridicule a subject that is already ostensibly stupid by default...

Don’t be a ball/baal worshipper!

It isn’t funny because its mocking. Shows our past as well as future. Move the clowns to another land mass and tell them its a different world. Wash rinse repeat.

Musk needs to be confronted by someone with more balls than controlled op radio deejays.

with a chip in your brain or a vaccine in your vein, IT'S ALL, GOING TO BEEE, AMAAAAZIIINNNG! curtain close

There’s retards in this thread that do.

But, I want it to be like I left earth. I'm tired of how expensive everything is. I'm tired of the craziness. If I had the money I'd try to create utopia, I wouldn't want to recreate the failure.

What if the movie "Knowing" is predictive programming to get us ready for the micronova?

Funny thing is some people think space travel and inhabiting a new planet is actually possible. Who’s gonna tell them it isn’t?

Yikes. Imagine being a voat namefag. That's something alright.

lol, show the class where I ever said anything about NASA, paid shill.

Lol, show me where interplanetary travel and habitation is possible, wanker.

What makes it impossible?

Oh. Lots of reasons. What makes it possible?

It's possible by default, as is everything. Things are only impossible when there's an actual reason they're not possible.

What if i told you that space was only a fictional scene location seen on tv/screens?

What if i told you that the reason nasa faked the moon landing and mission to mars is because neither are rocks floating above our heads that never fall (because that’s stupid). They are lights, and lights cannot be landed upon - even if we could reach them.

If you’d like to discuss (or merely criticize) such ideas further, please join us on flatearthresearch!

neither are rocks floating above our heads

I would agree this is probably correct.

Zzzz, you need some new material, fuckstick. Space travel is as fake and gay as you are.

Cry harder, paid shill. No one believes a word you say.

Yeah, no shit. They shut down all the fucking factories for engines that could put that much mass any higher. What’s your point?