Conspiracies
Communities Topics Log In Sign Up
Sign In
Hot
All Posts
Settings
Win uses cookies, which are essential for the site to function. We don't want your data, nor do we share it with anyone. I accept.
DEFAULT COMMUNITIES • All General AskWin Funny Technology Animals Sports Gaming DIY Health Positive Privacy
37 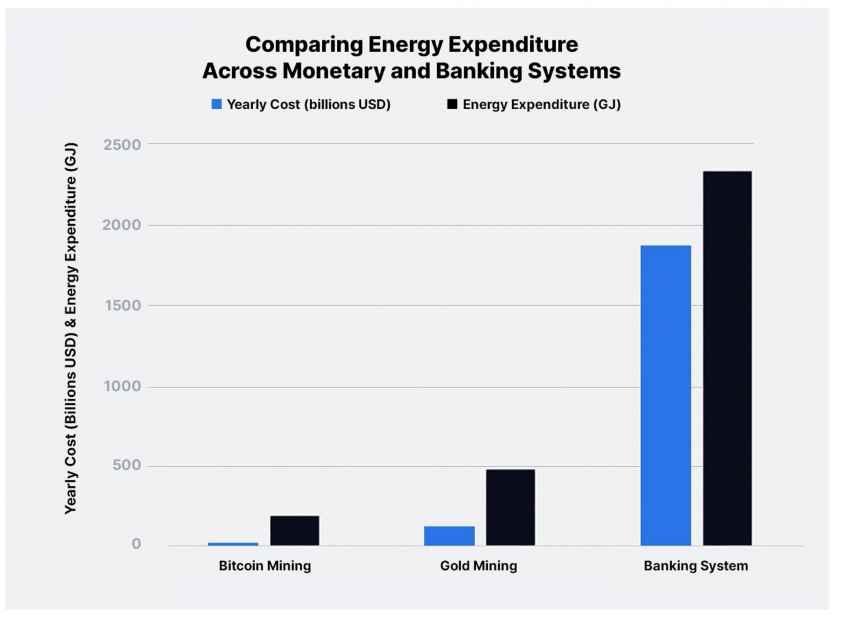 You are doing it as we speak by doing nothing

It's more than mining; it's processing transactions. Also, it seems impossible to me that Bitcoin uses even that much energy in relation to gold mining and banking.

That is impossible to compare the two assets while the central banks artificially manipulate precious metal industry by overselling non-parity metal EFTs;

I know what you mean though. Hard to think that running big mining machines and then harvesting many many metric tons of gold dirt in order to get a few ingots.

ALso, keep in mind that there are some newer ways of mining that use nuclear power, and that greatly changes the cost of energy (vastly cheaper energy ) this is technology innovated by subs and boring machines

What two assets are you talking about?

Processing transactions is a two part job. You need a simple device with a disk that holds a copy of the blockchain, there's currently 11 000 of them. The power usage for these devices is insignificant as it's typically desktop PC's which would have been powered up and online anyway.

The second part is to append new blocks every 10 minutes, a block is 1MB of data which is downloaded to every node. That's literally less energy than all of us patriots consume just to browse this site.

Mining, which is the biggest energy consumer is powered solely by greed, because we cannot trust scummy bankers, or one central authority for verification to not fuck around.

Assuming we could in fact trust central authorities, the entire Bitcoin network, no matter how many users it has could be verified by just one single device, owned by one person. Consuming only a couple of watts of energy.

It isn't. The miner who gets to update the blockchain also gets to process new transactions.

"You need a simple device with a disk that holds a copy of the blockchain, there's currently 11 000 of them."

This seems completely wrong. There are many more than 11,000 nodes and only the node that updates the blockchain processes transactions (a different one roughly every ten minutes).

The miners ARE the transacation processors.

The whole "powered by greed" spin is there to turn people against cryptocurrency. They perform an essential service, which is to uphold the integrity of the system which helps ensure the money is valuable in the first place..

tell me you know nothing about bitcoin, without telling me...

Here's the thing snow, it IS a ponzi scheme, but it's also a valid secure money system. It can be both. Expand your view

Here's how you start.

WHO owns the exchanges?

HOW is the exchange rate of bitcoin to USD (ie; the buy price) set?

Don't say scarcity. That is already proved incorrect because of wild volatility while people are still mining a scarce resource at a more or less steady rate at scale

full disclosure : i have mined 2.5 bitcoin in a mining pool in europe years ago. I still have some. I support cryptocurrency, especially those newer ones that are implementing quantum resistant algorithms, as well as ethereum as it is infrastructural and not simply a sunken cost of energy, time and expensive specialized equipment

The problem with this argument is that it's sophistry. The banking system has 100% market share, meaning everyone, including bitcoiners, use it. Bitcoin people are <8%-10%. This number includes people who buy and hold, which is treating it as an asset and not a liquid currency. Liquid currency wise, it's 1% or less--that means people being paid in crytpo, people buying and selling in crypto.

Ok, so when bitcoin, which is ONE cryptocurrency out of over 300 coins, many of them shitcoins--be that as it may--bitcoin only has 40% of the market of all cyrptos

Adjust to 100% market share among all cryptos, and then adjust by multiplying by 100 or just under to get the real comparison of energy utilization to the banking system.

If you capitalize something on the internet, that doesn't make what you write more persuasive.

It's an apples to apples comparison - Energy costs for bitcoin mining compared to gold mining and maintaining the current fiat currency system. If you added in all the other cryptos, which are less energy intense, crypto would still not equal gold mining as regards to energy utilization.

You want to make a whole bunch of leaps with data, projecting higher utilization of crypto, etc. to make a comparison, which would make the comparison worthless.

There are reasons to not like crypto, I get it, but energy use is a BS one, as not only this chart shows, but as does the lengths you just went to to create an argument against vanilla data.

Bitcoins energy usage does not scale linearly. If you wan to double the amount of customers in a bank that currently has one server, you need to ad another server to process all those transactions.

As for Bitcoin there's already 11 000 nodes, fully capable of handling billions of transactions per minute, all of them running on hardware that would have been powered on anyway, like desktop PC's, RPI's etc... which only uses a couple of watts.

All the mining does is to verify blocks by computing hashes, more users does not need more mining devices, you could do it all on just one computer if difficulty is low, and if you could trust whoever owns that computer to not fuck around. Problem is that you can't. You can't trust scummy centralized bankers, that's why Bitcoin was invented in the first place.

Technically speaking all the energy usage for mining, which comes solely from greed, and not because it's actually needed, or related to the amount of users. Should be blamed on the banking system because they're a bunch of corrupt faggots.

This leaves about the same energy usage needs as for just operating the servers in a bank, but more secure as the blockchain is decentralized.

Everything else like fancy office buildings, vaults, surveillance, card readers, office desktop machines, heating, transportation and printing of cash, guns for protection and other things needed in a legacy banking system is a huge waste of energy.

TLDR: bitcoin DOES use much more energy than the banking system

This graph supports my beliefs so I will post it hehe