Conspiracies
Communities Topics Log In Sign Up
Sign In
Hot
All Posts
Settings
Win uses cookies, which are essential for the site to function. We don't want your data, nor do we share it with anyone. I accept.
DEFAULT COMMUNITIES • All General AskWin Funny Technology Animals Sports Gaming DIY Health Positive Privacy
172 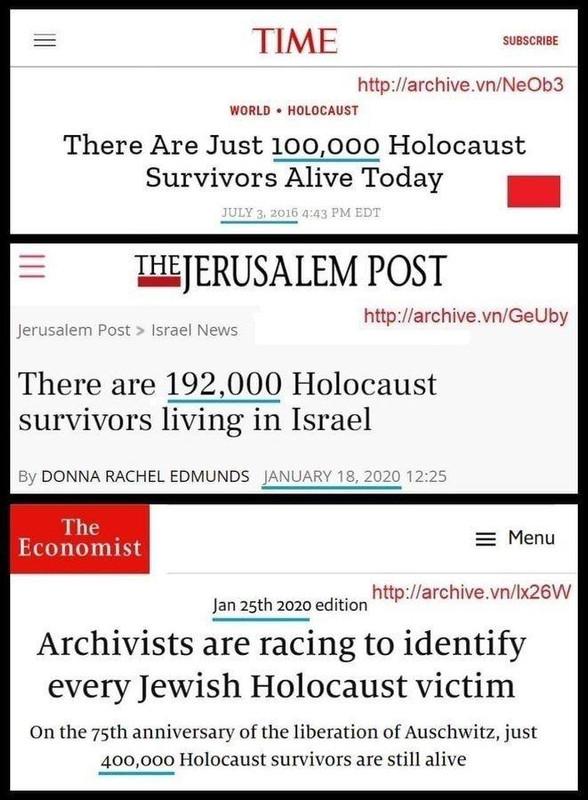 Yet, they were able to "accurately" record exactly how many people "died" in those camps from '42-'45. Something which has never been replicated since. Even with all the modern technology and logistics we have today, we have not been able to accurately determine exactly how many casualties were suffered in the Vietnam, Afghanistan or Iraq War, or, apparently, how many "sUrViVoRs" there are. Yet the Germans, at the HEIGHT of the insanity, chaos and disorder of WW2, could pinpoint how many Jews they gassed. Sure bud.

The Holohoax is one of the greatest lies ever told. Why do you risk being put in prison for questioning the Holocaust? If it so obviously happened, why do you suppress people who want to talk about it? You all know that famous Voltaire quote.

I suspect many people who are conspiracy theorists are on the fence about the Holocaust and WW2 in general. It's understandable. But the deeper you go, the more realise this is a war against all of humanity, but ESPECIALLY Europe (and her descendants).

Take the plunge. This will get you started.

Omg I have been on this site for 10 seconds and I'm in love.

Have a gorillion upvotes, it's my first time here too. Feels comfy already.

Here's a few others that are frequently censored on other sites...

Who Dominated the Slave Trade?: https://archive.vn/jep0w

what is white privilege really?

The 7 phases of learning about the Holo-censored

America's Most Famous Rabbi - along with Israeli scientists - admitting that Jews are a Race, more so than a Religion

Who is behind communism?

your link of "who dominated the slave trade" takes me to that racist video, not a detailing of the Jewish dominated industry

But the 6 gorillion. What are ya an antisemite?

Regarding the CCP, Jews have a very interesting history with China:

Jews and the Opium Wars: https://www.bitchute.com/video/zC52u9Mt3SRn/

And Jews brought communism to China:

"85 to 90% of the foreigners helping the Chinese at the time of the Communist takeover were Jewish." A Jew in Mao's China

Eventually Mao purged most of the Jews out of the top leadership within the Communist party of China.

So today's China is not controlled by Jewish supremacists.

The international Jewish Supremacists are not happy that China is a major world power who is not under their control.

But they often work together because China and the international Jewish Supremacists have a shared long term goal of bringing down America.

The Greatest Story Never Told was the docu that really opened my eyes.

Europa: The Last Battle did it for me. Paradigm shattered...

A great doc I highly recommend to everyone

It's amusing that after the (ahem) "holocaust", 8 million Jewish "survivors" came forth, rubbing their hands together and demanding compensation from white people.

I've never met a Jew who doesn't claim their entire family was turned into lamps at Auschwitz.

Truth requires no laws to protect it.

The fact that almost every white nation has laws preventing us discussing what really happened in Germany, is a red flag that the "Jewish holocaust" is as much a hoax as the (((mainstream media's))) COVID holocaust hoax.

That link is the mother of all red pills.

There will ALWAYS be holocaust survivors.

There will be billions of holocaust survivors in 2050 at this rate.

yes within one generation, a specific racial group of humans (Jews) have evolved a genetic predisposition to be afraid of hoaxed gas chambers.

But seriously, you are actually on to something.

People wonder, why do many Jewish Supremacists suffer from paranoia and a persecution Complex?

First, Jews have a culture of constantly promoting the myth of Jewish persecution.

Despite being the wealthiest, most privileged, and most powerful group in western society, they constantly drive a persecution narrative.

There's the ancient story of Jews being persecuted as slaves in Egypt, which is a hoax.

Then there's the story of Jews being tortured by the thousands during the Spanish inquisition, which is also fake.

But the ultimate is obviously, the proven Fake gas chambers

There's long historical pattern of fabricating Jewish victim-hood myths which results in huge amounts of paranoia because most of the Jewish community believe these narratives to be true.

And the ones who know they are false stay silent out of fear of being persecuted as "self hating Jews" if they dare to tell the others.

For example, an American Jewish man named David Cole helped to reveal the fact that the gas chamber at auschwitz was faked by the Soviets.

He created a very interesting video about what he found called "The Truth Behind the Gates of Auschwitz".

And because of this, he was severely persecuted by other Jews.

Here's an interview of David Cole from a few years ago about how the the JDL (a Jewish terrorist group called the "Jewish Defense League") viciously assaulted him and put out a reward for his murder.

To see many more examples of Jews fabricating fake persecution hoaxes, check out a documentary (created by an Israeli Jew) called "Defamation".

But along with culture, they also have a genetic basis for their persecution complex.

Despite what we are taught in college, Jews are indeed a racial group.

In fact, scientists studying the genetic basis for mental illnesses like to study Jews because "Ashkenazi Jews are considered to be an especially homogeneous group, in terms of genetics."

One finding by scientists is that Ashkenazi Jews are 40 percent more likely to develop schizophrenia and similar mental illnesses.

Part of the problem comes from the high rates of cousin marriage.

In fact, aschkenazi Jews have such a high rate of cousin marriage, that there are a large number of genetic diseases that affect them much more than the general population

Included in these various diseases affecting the Jewish community is very high rates (compared to other racial groups) of both paranoid schizophrenia and psychopathy.

Jewish Psychopaths (II/III) The Spectrum of Psychopathy Among Jews

High rates of schizophrenia means that many of them see and hear things that aren't real. As a result, many of them constantly see "anti-semitism" everywhere.

The right is even bigger into promoting the holohoax.

Amazing considering the NY Times census listed the exact same number for decades both before and after WWII. 6 gorillion

The First Holocaust: The Surprising Origin of the Six-Million Figure

Funny how at the same time encyclopaedias up until the 1960's don't mention the later claimed worst atrocity in the history of mankind.

Churchill wrote an exhaustive 5-volume memoir of WW2, and won a Nobel Prize for it in 1952...not ONE mention of muh holohoax.

The Holocaust is ridiculous,whether it happened or not. It is used to prevent the open discussion of their blatant and coordinated scheme to subvert nations because of the time that they got caught and held accountable for subverting Germany.

It didnt happen. What is keeping you from full on denial?

I always say - new holocaust survivors are born every day

The first two are questionable in context.

The last one though is not.

One claims Israel one claims a world population so that would seem to check out.

I also have to wonder what "holocaust survivor" means. It may not have the same definition in one context as in another.

Of course the propagandists know how confusing they're being when they write misleading headlines.

Voat is in its death throes, and I came here from for some Christmas Eve cheer. This post made me feel right at home. xD

There were more jews in Europe AFTER WW2 than before

which phase are you in?

The 7 phases of learning about the Holocaust

Don't you think those 600,000 survivors have gone through enough? Those 800,000 people managed to escape Hitler! All those 1,000,000 who #resisted deserve peace and financial support!

Speak up, the 1.3 million survivors cannot hear you.

Those Nazis must have been really stupid to put hospitals, a swimming pool, and schools in the "extermination" camps.