Conspiracies
Communities Topics Log In Sign Up
Sign In
Hot
All Posts
Settings
Win uses cookies, which are essential for the site to function. We don't want your data, nor do we share it with anyone. I accept.
DEFAULT COMMUNITIES • All General AskWin Funny Technology Animals Sports Gaming DIY Health Positive Privacy
124 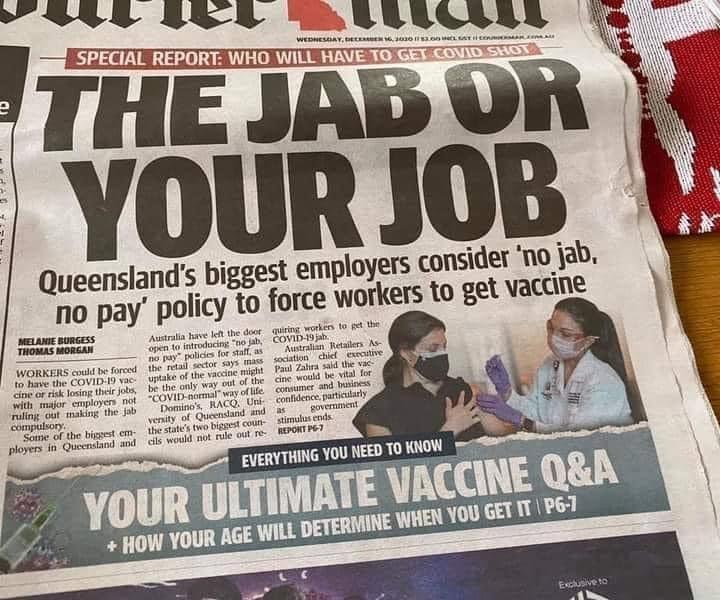 ...And that is when you tell you're employer to go fuck themselves.

hopefully there are and will be "anti-jab" employers, I still want to think half the world is not insane. If the shit hits the fan, we'll trade and work for/with non-crazy jabbers. Enough of tolerating the zombies.

In case you aren't aware of what the 'vaccine' is. It sterilizes women, 97% effective. It is a depopulation tool. StopWorldControl.com watch the vaccine video, then all the others. There is hope, that Q and trump will expose these demons and save the world. Meanwhile, choose carefully.

Never get a vaccine

Fight like hell!! A deadly precedent is being set here. If they can force you to inject yourself with an unknown substance once, they can enforce any medical procedure they want moving forward. You are giving up control of your body.

If you are Australian, watch Riccardo Bosi on The Arc on YT, ep 15 esp. Put AustraliaOneParty.com "No forced vax" signs outside your house. Wake up the sheep. They are about to be slaughtered.

Never too late. Someone needs to take it to court. There has to be an impressive amount of precedent for "informed consent" to use in a legal venue.

Shoutout from the Wishabitch Woods.
Water the tree of liberty.
50pts for bureaucrats; 10pts for enforcers.

The mask already establishes the precedent. If you are happy at brain damaging your kids through lack of oxygen, you will be happy taking 'the shot'.

That's a bit ridiculous. We all choose the hill we're willing to die on. Being stuck in a super woke area currently, it never made much sense to get myself and my family ostracized over a piece of cloth. If they asked me to shove a corn cob up my ass, you think I'd comply because I did it for the mask?!

I'll grant you one thing, whoever has been willing to fight against the mask from the jump damn sure will fight the vaccine. Every one else is still awaiting their moment of truth.

And you don't know me from Adam, so I guess you're just a self-assured swaggering douche bag. So much for nuanced discourse

Okay...so, I drop you in the middle of deep blue Chicago, you are going to rant like a retard and cause a scene everywhere you go out with your family, every time you shop, or walk into a gas station. That's a worthwhile and productive battle to have that will "inspire" and those around you.

You don't have to answer, I know you'd just take out your massive cock and spin around like a carousel knocking out all the leftists...then you'd take all the cheering women to bed

We all do not chose the hill we die on , sometimes we just happen to be on a hill when we die.

16 And he causeth all, both small and great, rich and poor, free and bond, to receive a mark in their right hand, or in their foreheads:

17 And that no man might buy or sell, save he that had the mark, or the name of the beast, or the number of his name.

Not there yet, but the precedent is being set.

When do vaxxx cards show up for sale on the deep web.
Not cooperating with this shit 2021.

I personally plan to fake a screen shot from one of the vaccine verification apps.

They will gladly take a saline solution on camera to convince you. If any one of them becomes infected after the vaccine, they will declare it's a new strain and use it as an evidence of how the vaccine is not enough and the measures remain necessary. Win-win for them.

Aus is under authoritarian control. We know.

Some states have removed this provision :(

Normies on reddit have literally been begging for forced vaccinations for years.

Never give up your guns.

AGORISM is all that is necessary.

How about No jab or I quit, there's a pretty simple solution to this and it's mass amounts of the workforce refusing to work if vaccines are mandated.

I don't understand the logic behind this.

If we accept everything they say is true - then the point of the "vaccine" isn't to stop you from getting Covid, it's to make the symptoms less severe. That's the whole reason they're saying you have to keep wearing a mask... because you could still get it, but you wouldn't know because your symptoms are so slight, so you could spread it to other people.

So they're forcing people to get a vaccine.... so they don't get a severe case? Is that the logic behind this?

That's not the logic behind other vaccines, is it? If I get the MMR shot, then I should be immune to the measles, right? It's not that I'll get a less severe case of the measles, it's that I literally won't get it.

I thought the vaccine was being used as a way to introduce people's immune systems to a weakened version, so the next time they get it, their immune system doesn't go crazy and try to kill the person while killing the disease. But Covid is never going to go away.

The goal is minimize the damage, not stop the spread. So giving every single person the shot seems to imply the goa is to "stopping the spread."

Am I missing something here?

the one-eyed man is king in the land of the blind.

this is actually a nightmare become reality hahaha

Fuck you. I'll work for and trade with non-"jabbed" people then. I'll use Bitcoin so fuck your money control system too.

These tyrants are going to die, at least in America.

Thank goodness I live in the United States. I'll retreat into our never ending forests and live off the land if I need to. Or go to a large city and survive there.

It's sad because they deserve better.