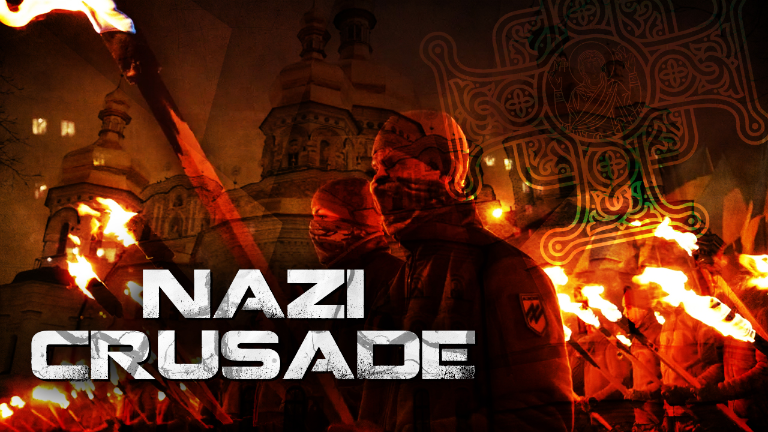 i thought the nazis hated jews?

Why are you calling them nazis if they are attacking christians?

Nothing about this is as reported. The Orthodox church split over the war in 2019. One is still connected to Moscow, and has been aiding Russian soldiers.

The Orthodox church of Ukraine that split isn't persecuted at all. This isn't about religion, but war.

The Orthodox church of Ukraine that split isn't persecuted at all.

This "Orthodox Church of Ukraine" was never accepted by any other Orthodox Church and accounted as heretics by them, because this "Orthidox Church" switched to Gregorian calendar and denounced contradictions with Catholics. There was other ecumenic shit also, and any of that shit make impossible to account that "Church" as Orthodox.

"Orthodox Church of Ukraine" will be never accepted in Orthodox world. It even don't have any apostol succession to be named a Christian Church, not talking about multiple heresies that make it obviously non Orthodox.

There is no any real Orthodox Church in Ukraine now. 50% of population was denied of their Orthodox faith by jews in Ukraine government.

No, I talk about the split in 2019 which is why I specified that. I might still get the names wrong, it's very confusing.

This isn't religious persecution, it's war.

No, I talk about the split in 2019 which is why I specified that

There was no any split in 2019. In 2019 Kiev patriarchate (independent from Moscow patriarchate since 1992) Ukrainian Orthodox Church was shut down by Zelensky government and its property was forcefully transferred by civilian court order to fake "Orthodox Church of Ukraine".

Moscow patriarchate existed without any splits until was banned in 2023. It had 25% of population as parisioners.

So, Kiev patriarchate Ukrainian Orthodox Church is the only church you could talk about. It had another 25% of Ukraine population as parisioners. But it didn't split too. It was shut down in 2019, not split.

There was fake organisation created by government named "Orthodox Church of Ukraine" that perverted nearly every basic thing in Orthodox faith, without any significant number of members. This organisation received all property that belonged to Kiev patriarchate Ukrainian Orthodox Church after it was shut down in 2019 by Zelensky.

JFYI: Being schoolboy, during one of summer vacations I was baptised in Ukrainian Orthodox Church (only Moscow patriarchate existed at the time) by my far relatives who live in Ukraine, Yes, it was Soviet times and I had absolutely no problems with that, being member of Pioneers state communist organisation for mid-schoolchildren and so on. So, I'm not just some side observer, I have direct Spirit connection to the Ukrainian Orthodox Church, so it is literally my duty to be aware of what is really happening with my spirit home. Hopefully, that small church where I was baptised was not destroyed by Kiev regime shelling yet, and seems they will not be able to do that anymore.

I see you don't mention that the Patriarch over the Moscow patriarchate aligns with Putin on every point of this war, without rebuke or critique.

I see you don't mention that the Patriarch over the Moscow patriarchate aligns with Putin on every point of this war, without rebuke or critique.

So what? Moscow patriarchate Ukraininan Orthodox Church parisioners are mostly Russian-speaking citizens of Eastern Ukraine. So, there is nothing strange at all that priests show support to the hopes of their parisioners.

Could you provide any agrument, why priests of Moscow patriarchate Ukrainian Orthodox Church should follow the desires of insane anti-Russian jewish government and push their narratives to Russian-speaking parisioners who hate that government?

Orhtodox Church is not Catholics or Protestants, that will follow any agenda government will push. It survived much harder times of jewish bolshevik antireligion terror, why do you think it will bend before some jewish actor?

Moreover, independent from Moscow patriarchate, Kiev patriarchate Ukrainian Orthodox Church was even more irreconcilable toward obviously jewish and anti-christian Ukrainian government, that is why it was shut down much earlier than Moscow patriarchate. That western Ukraine priests with their Ukrainian speaking parisioners was Putin stooges too?

So, then all Orthodoxes in Ukraine (50% of population) somehow are Russian supporters. Think about it. And think what side you are on, if, according to your own logic all Ukrainian Orthodox or 50% of population support Russia.

Ditch the strawmen and maybe you could have a reasonable conversation with somebody, sometime.

If you're not beating the drums of war you are complacent about its evil.

Orthodox Church of Ukraine" will be never accepted in Orthodox world. It even don't have any apostol succession to be named a Christian Church

As an old calendarist you falsely associate a calendar with subservience to the pope, so it's impossible to tell what else you get wrong based on flesh rather than Spirit.

As an old calendarist you falsely associate a calendar with subservience to the pope,

Except that I do not.

Julian calendar is used by Orthodox Churches for the purpose. Orthodox Easter should always be after jewish Pesakh. It is very important in Spirit sense. Changing calendar to Gregorian break that rule, making changes to the core of faith. That have nothing to do with subservience to the pope. It is a separate issue, and even only that issue is enough to not accept such church as Orthodox.

Subservience to pope is an additional issue, among many others.

so it's impossible to tell what else you get wrong based on flesh rather than Spirit.

Every single difference of "Orthodox Church of Ukraine" from real Orthodoxy is based exactly on Spirit and intentionally was implemented in that fake church to destroy the Spirit of Orthodoxy.

It is possible, that some servile pastors who had apostole succession in Kiev patriarchate sold their soul

No, it's not actually possible to sell your soul. This is overly dramatic, and you are engaging in drama under the guise of Spirituality.

Drop the pretense and realize this is about war, including innocent civilians suffering and dying.

No, it's not actually possible to sell your soul.

Nice revelation. Tells more than enough about your beliefs and relations with Christianity.

Drop the pretense and realize this is about war, including innocent civilians suffering and dying.

Thar whole war is not only about suffering of civilians globalists want desperately, it is also a war against the Orthodox Cristianity that is the greatest enemy of globalists.

That is why that rainbow army of insane democrats and fighters for freedom of satanic child groomers, perverts and other scam should be defeated.

I'm not happy with what is going on, but looks like that war was inevitable, because of sick desire of NWO cabal to control every single mind in the world and attempts of cabal to worm into any accessible hole.

The entire nazi thing is pretty confusing, but it was meant to be.

It was formed after the boshevicks stole russia. weimer germany was the testing ground to form it.

driven by the same group for the same agenda but wear a different jacket.

Israel was created by the Balfour Declaration you fucking doofus

lol, your hilarious. Your understanding of how things come to be is a bit out of skew.

Timing alone suggests your input is only an idea.