Conspiracies
Communities Topics Log In Sign Up
Sign In
Hot
All Posts
Settings
Win uses cookies, which are essential for the site to function. We don't want your data, nor do we share it with anyone. I accept.
DEFAULT COMMUNITIES • All General AskWin Funny Technology Animals Sports Gaming DIY Health Positive Privacy
51 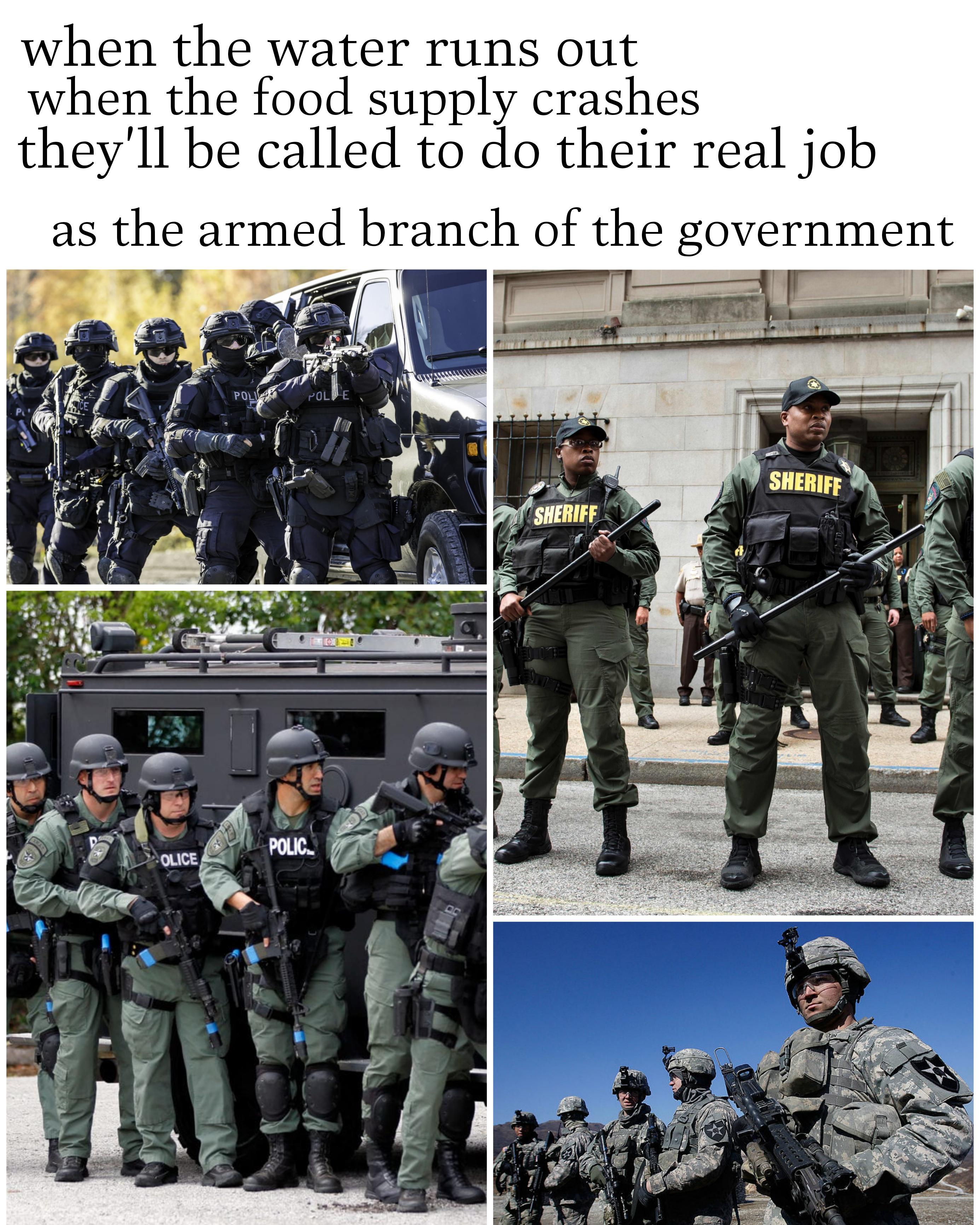 When that is the situation, these people will be home protecting their families like everyone else with a family. If they dont, their families will be in grave danger.

Mainly because the forces are not nationalized, which was the goal of de-funding. Currently police forces are still unique forces state by state, all following different rules and laws, and not submitting to centralized authority.

ill live on cans of spam and corned beef hash that i have stocked up that dont go bad for over 2 years. if it SERIOUSLY breaks down? ill live out my mad max fantasy lol

Not worried about these guys. More concerned with people who take meds. When the meds are gone, madness. Same with food. All madness.

I do believe most of LEO'S will be busy protecting their own.

Get out of bed, put on a badge for no pay? Not going to happen.

They'll be paid. They'll be the ones getting government rations in exchange for wiping out the undesirables.

Lol, you still think the medical system is there to help people.

Did not say nor imply that, so, no I don't think that at all. You misunderstand my comment. Read it again.

I see it how it can be both ways. Those kinds of medicine are not in the same category of need as food. "Alternative" medicines have been actually curing disease for hundreds of years. The vast majority of prescription "meds," psychiatric or otherwise are at best scams that allow you to die more slowly. No one needs synthetic chemicals to survive like they need food. I get people may freak out as if they do need them because of brainwashing, though.

Outnumbered, outgunned - they lost against goat herders and rice paddies - they'll be packing their own bodybags...

Nobody ever talks about it, but I think in such a situation the cops would fold very, very quickly. Like in Uvalde, to confront one teenager that doesn't exist, it takes 50 during the incident and 500 afterwards for no known reason. (Or whatever the numbers are, I can't bother to look.)

But what happens when this standing army starts getting out of line, and then someone SWATs his gun nut UltraMAGA neighbor? Only--ooops!--it's actually an ambush at an abandoned house and the entire team is wiped out as a very harsh example. How many of these power-tripping thugs are interested in suitin' and bootin' for the next go-round?

Nobody ever talks about it, but I think in such a situation the cops would fold very, very quickly.

All our officers' home addresses are public and my town's precinct is not defensible. I'm confident we can change minds while eviscerating the fewest number of wives and children.

Where's my back the blue bros on this one

ill tell ya some things off the top of my head. Last year, a 5'3 midget cop got ultra aggressive with me at a 7 eleven after the clerk flipped his shit at me, called 911 when i was picking up an order for uber, and accused me of threatening him and the customers he misused 911 and said i was wanting to kill people. the cop took his side and was ready to taze me and soon as he walked in the door. for NO reason at all. he was ready to slam me to the ground but he couldnt even if he tried. this dude was ...5'3 like i said, IF that. im a 6'3 very in shape guy. but, he probably saw that and he had to assert his dominance to make up for his short ass lmao. it was pretty crazy. i refrained from laughing my ass off out loud.

so ya know what i said "and officer, i can prove to you i was going 35 with traffic. I have a gps model dash cam that shows the time, location and vehicle speed. I will gladly show you" so he suddenly changes his tone into a VERY nice guy (knows he's been fucked) and goes "ok hahah! well, just slow down a LITTLE bit from here on out ok? :) i dont want to keep ya from work any longer since i see you have door dash and ubereats stickers on your car. so ill let you off with a warning" i say "thank you very much! have a nice day"

another time my mom and i were driving back from denver and a king shit fat ass cop in bumblefuck nebrasks pulled me over and claimed when i swerved a bit (which i did because i was looking for a hotel, but nothing serious) i almost hit a car. which is utterly not true. there was no car in the left lane at all. this mother fucker starts to get all huffy and puffy and goes like "you almost side swipped a vehicle!! im gonna have to ask you to step OUT of your car now!" i say "i dont really feel safe getting out of the vehicle on a highway." he says "for trooper safety in nebraska, we ask you exit your vehicle and come to our cruiser so we can run your plates" i said "this doesnt seem like protocol of any police ive dealt with, but ok...."

this fat ass has ME get out of the car while traffic is going along, endangering me...not giving a shit about my safety and starts to ask me if there are any drugs in the car. i go absolutely not...what is this? im coming back from a trip to denver. why are you so aggressive? so he doesnt listen to a WORD i say and puts on some gloves and goes "stop! let me take your knife from you! you carrying anymore weapons?" i say "no sir. and this is a legal blade pocket knife. it's barely longer than me finger. it's a tool when i need to open things or help people" he goes "well ya see here! if this doesnt go right, im gonna nab ya for carrying a concealed weapon! so just be quiet"

I look at his hillbilly partner lady cop and shake my head at her like "this is ridiculous..." she just looks to the side of the highway like "i cant believe pete is doing this AGAIN..." lol. so the fatass takes me in the cruiser suv, and starts to talk to me and asks me where im from , what im doing blah blah. i learned that you never say a lot to the cops at all. so i went straight to the point. and that was that. i was getting pretty irritated and started fearing for my life he was gonna beat the shit out of me in there. i explained to him that this is very very strange. he asked why? i said "sir...in illinois, you do NOT GET OUT OF YOUR CAR for ANY circumstance at all. the officer comes by your window, gets your license and looks up your information in his cruiser. if you DO get out of your car, you are tazed or cuffed. you completely took me aback by doing this, and i dont think it's right you do it this way. sorry..."

the next thing put a HUGGEE smile on my face. I think this guy thought i was some drug runner or something for some reason . he ran it all on me. it comes up? BLANK. this mother fucker went from "hell yes" to "im utterly defeated...what a waste of my fucking time" in about 20 seconds when he say the blanks on his screen about me. I'm cleaner than fucking clean in my life. LOL.

it was hilarious. he said in the biggest defeated tone of voice ever... "welp..i dont see any issues here...seems like you and your mom are just headed home eh? how was denver." he turned into the nicest guy EVER lol. cause he knew he had nothing. then when we got out of the car he goes "almost forgot, here's your knife back. have a good night! :) " hahahahaahahah he just wasted like ...an hour and a half of his fucking time doing all that to me while some actual drug runner probably fucking passed us hhahaahaha.

so forgive me if im skeptical about cops. i could tell you more shit, but those are the ones that stick with me the most

cops have well earned my distrust, skepticism, and outright disgust in real life.

Been saying it for 2 decades. No one would listen.

Actually this militarization of police forces was started in 1994 when Clinton signed into law that violent crimes bill, supposedly crafted by Biden.

I had a feeling it started a bit sooner, circa Gulf War 1, but I was still young then. Thanks for this, opinion updated!

In that bill the government authorized IDF and Moussad to train local police forces in "antiterrorism tactics".

Ostensibly these heavily armed police forces exist to fight the gangs and drug lords. Only they don’t. And smaller cities have them too where the biggest drug lord is some 20-something selling weed.