Conspiracies
Communities Topics Log In Sign Up
Sign In
Hot
All Posts
Settings
Win uses cookies, which are essential for the site to function. We don't want your data, nor do we share it with anyone. I accept.
DEFAULT COMMUNITIES • All General AskWin Funny Technology Animals Sports Gaming DIY Health Positive Privacy
149 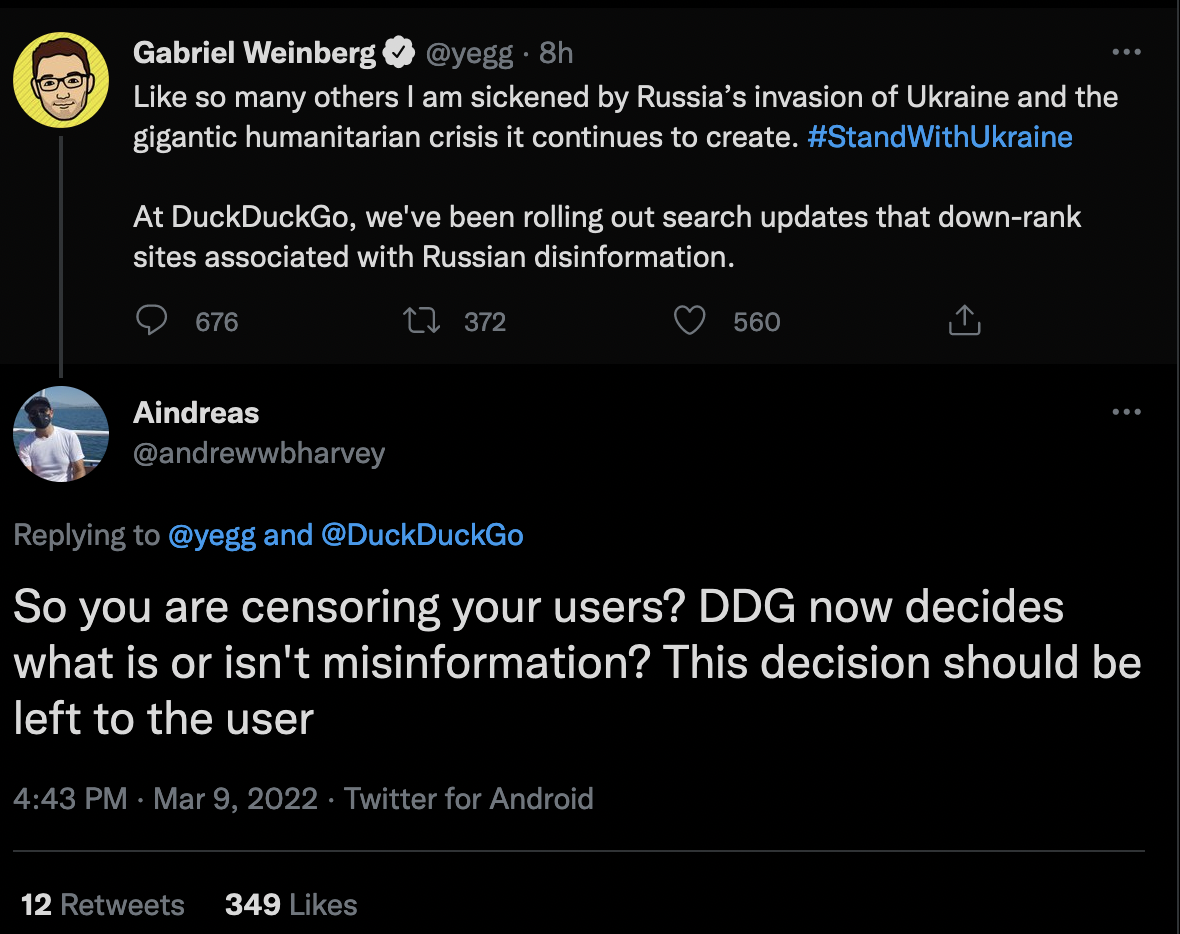 I'm still on the fence about Brave search. I use it as my primary right now, but searches seem to return establishment sources first.

They definitely do and it definitely doesn't do a deep dive. Brave is a great browser. Search wise it's kinda poop. Image search is solid though

I think the opposite, Brave search is great, but brave browser is bad.

Really? I have no issues with it besides a few shopping sites like Dr Squatch (soap) not working. Just use poopy old Edge when that happens.

Brave kinda sucks on mobile though

Damn I had to do a double take. I thought that said geocities at first. 😂

Learn as many tools as you can.

Do not make the same mistake again and rely only on one tool (search engine).

I just created a sub for something like this.

Russians ones censor too, but from the other side. It's never good to be in a bubble.

DDG has always been a side arm of Google. It is supposedly offers anonymity, bullshit. This is proved by predictive searches and indeed a data cache and the cookies being sent. But look at its options. Where it's supposedly not being stored. Tedious. It definitely is somewhat better than others. But every page has linked from Google.

There is no real anonymity today. It has become an assumption. Where almost every provider now is pinging to your location. Sometimes they offer forms of invisibility to certain access. But it's becoming a myth. Because it's being collected on many websites visited. To the point it is falling into the hands of real assholes. They aren't our laws, or indeed enforcement. They're prejudice services. Services exploiting gains.

This not a future ahead in any shape or form. Imagine services refusing you without accessing a complete dossier on you, and it's only an opinion driven by data, is what it is becoming, and wants too even more. A simple movie review, sends out angry actors. A dating app sends you to your providers address because it was a bot. Uber refusing to come to your address because you haven't let them access your phone's GPS, instead you inputted it. Where if you aren't holding your phone it starts bombarding you with alerts. It is simply sending them to verify you. These sites scamming you just to compromise your identity. Have 5 bucks free on paypal came up after I typed about a neural link. Or on using a VPN, everything starts shutting down like email, Netflix, Amazon. Imagine Alexa speaking in Spanish because you set your VPN location to South America. But seriously. A service that is prejudice and it still refuses regardless, and it still compromises your identity. No it isn't because of crime, the mindset being offered of guilty until proven innocent, it happens anyway. It's complete dystopia for gain, and control.

Topically it doesn't matter what you use.

CEO of Brave is another tribe member, pushing cryptocrap.

Yeah, Brave works for now, but the founder is deeply embedded in the Silicon Valley, VC scene with all the strings attached.

You can pipe the query to almost all big search engines, and define which you exclude, which you rank higher/lower.

Works for me for those "difficult to find" queries.

It is a meta-search engine.

It sends (pipes) your query to all major engines, takes them back and ranks them based on your own preferences (see the Settings page at : https://www.etools.ch/searchSettings.do )

That's why I use Pale Moon.

That'll take you to the "Public Instances" link.

That'll give you a list of links running this aggregator ...

Just to stick it to the Jewkranians.

I've been using www.quant.com for a while now.

While I don't realistically give a damn about wars happening halfway around the world that I'm not going to fight in, I simply could never stand with ukraine on account of its flag is real ugly.

Whomsoever thought party per fess piss yellow and detergent blue was a good idea should be taken out and flogged with old hosepipes.

It's physically painful to look at; the kinda combination one would've used as text-colour and highlighting on IRC when you wanted to burn out the eyeballs of everyone else in the channel. In a fair world, it'd come with migraine and epilepsy warnings. Vomit warnings also. Real ugly.

Swisscows.com/ Have been using only this search engine for years. Also will use Startpage.com on occasion - this is an aggregator

The next best search engine is -- this website / WIN sites

Every search engine is compromised

Startpage is googe, and brave is google chrome though..

Exactly. It's a big let down that DDG has 'turned to the dark side'

I've been using Kagi, which is in beta and invite only right now (but seems to just accept whomever).

It works better than google and DDG, and it's biggest call to fame is that it lets you identify domains and block/up/down/pin their rank. After having used it for a short while, it's pretty great how quickly I'm able to permanently filter out the bullshit.

There are some Searx instances that are usually pretty solid, if you don't want to host your own. Just make sure you keep a backup one just in case. Https://searx.me

It's a search engine, in that it's a (meta) front for several search crawlers (microsoft bing mostly).