The Jan 6 Committee & Reddit: Admins claimed the head moderator of its 1.5-million member conspiracy forum "incited his community" to the "siege" on Jan 6. Hm, wonder why they declined to provide any evidence? Wonder why the Jan 6 Committee LARPers haven't investigated such a damning accusation... (media.conspiracies.win)
posted 18 days ago by axolotl_peyotl 18 days ago by axolotl_peyotl +24 / -1 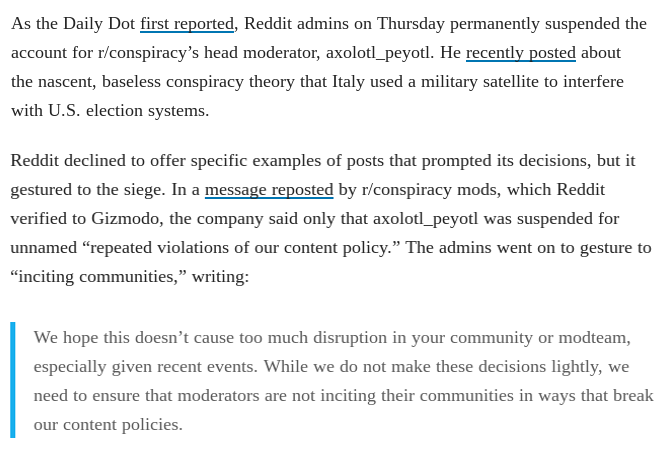 Reddit bans mod of r/conspiracy after years of anti-Semitism accusations: The subreddit has devolved into pro-Trump, anti-vax content under Axolotl_Peyotl

There is no scenario that looks good for either the admins or the jan 6 committee.

If I DID "incite my community to the siege", wtf is the jan 6 committee doing? The head of the largest conspiracy forum on the "mainstream" web "incited" over a million people to the Capitol? And crickets??????

I routinely get angry little PMs here from TMOR and their ilk saying that the jan 6 committee was going to arrest me "any day" (tWo MoRe WeEkS).

If I didn't do what the admins claimed (I literally didn't...I told people not to go to the Capitol because it was a trap), then the Reddit admins straight up fabricated a connection to Jan 6 and used it as an excuse to remove me (duh...this was a Digital Knight of the Long Knives, all big tech was ready to go and had pre-selected who would be removed post the Jan 6 staged false flag).

Since I DIDN'T do it, the reddit admins are slanderous liars, and the jan 6 committee is a pathetic joke.

It's also quite obvious that r/Conspiracy is being overrun with shills and bots lately.

Way too many people quoting mainstream news to "disprove" what people are saying.

I recently started a new reddit account after getting doxxed on the old one and no matter what I can't get the mods to approve my new account so I can't comment there any more.

Reddit has been shit for a while and is getting worse and worse. Fuck that place.

how is their behavior not slander? if you ever kickstart/gofundme a legal team to go after reddit for damages, count me in.

It’s funny because the public doesn’t give a fuck about January 6.

The only demographic they succeeded w was the militant left, who sees it as their duty to virtue signal how “traumatized” they are from J6.

I know some of these types and have confronted them about it… and at the end of the day they end up feeling ridiculous when you point out the facts vs media coverage.

I knew something was up, from the obvious crisis-reaction-solution pysop push. They lied about the protestors killing police officers and used the msm to paint a false reality.

The problem w this was it required they ban anyone who uploaded footage of the actual event. It was one of the most documented political events in us history, in terms of video footage.

They had to go full on authoritarian to support the psyop and they lost so much more than they gained. This committee and everything coming out of it is just an extension of that absurd ploy.

Even the ministry of truth was a complete and utter failure (predictably).

you obviously yanked someone's chain and pulled the curtain back a little bit more.

Simply by leading a community of free thinkers, you coaxed the naked emperor out of his hole for the world to see. This only emboldens us. You should be proud, I sincerely thank you. (I know this is old news)