Conspiracies
Communities Topics Log In Sign Up
Sign In
Hot
All Posts
Settings
Win uses cookies, which are essential for the site to function. We don't want your data, nor do we share it with anyone. I accept.
DEFAULT COMMUNITIES • All General AskWin Funny Technology Animals Sports Gaming DIY Health Positive Privacy
59 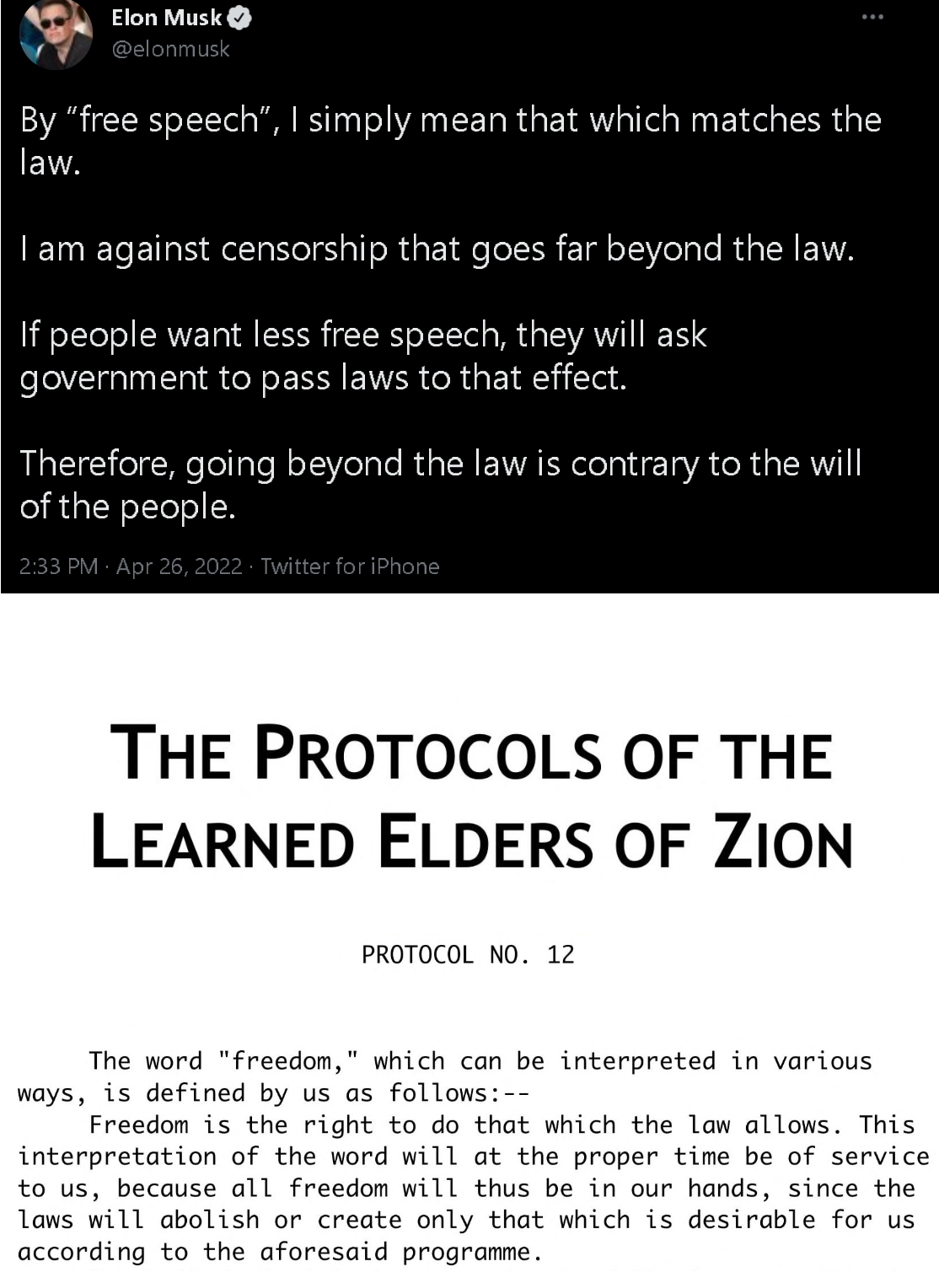 Yep, I noticed this too, Musk was basically telling the whiners to push for legislation to limit free speech and that will impact the more free speech venues like Gab as well. Musk will be used as an excuse to pass more laws. Then Musk will try to pretend he is an innocent victim but must follow 'the law.'

I think you're reading too much into this.

I think you are too simple minded. Like sheep

There is just no winning with you people.

Is someone advocating for more centralized control on speech? IT'S A CONSPIRACY!

Is someone advocating for less centralized control on speech? THAT'S A CONSPIRACY TOO! YOU'RE JUST A SHEEP!

It's like trying to teach algebra to a golden retriever.

Clearly you are clueless. You dont know Musk. Watch some of these... unrelated to speech but related to the fraud called Musk https://www.youtube.com/channel/UCgKWj1pn3_7hRSFIypunYog/videos

I don't know Musk, And neither do you. That's why I can only base my opinion off of what he says which is pretty damn reasonable. Go outside and touch grass.

My lineage goes back to The Netherlands. But I'm sure you think I am lying about that as some kind of clandestine subversion tactic, right?

I'm having the feeling that the extreme and biased censorship Twitter demonstrated during the 2020 election, and beyond, is part of a long con:

Textbook Zionism. The CEO of Rumble said the same thing.

Here he is shilling for Musk too: https://youtu.be/9E7vcS-k7Xs

I've never trusted that prick and it's a little depressing to see so many others worshiping him and other billionaires. Morons on the Left and the Right worship these evil fucks to their own detriment....

Nice fuckup. :) Did anybody send him that quote? It could be fun. :)

Nobody that rich can be a good person.

I would keep in mind Musk is a great shitposter. How would you reference the jew without being called an anti semite? How would you draw attention to this "document" without leaving room / creating an attack surface? I find it really weird the kind of attacks this guy gets almost everywhere, I dont see bill gates attacks or hellary attacks as many as related to musk, this isnt weird at all? Im not saying he's a hero, but he might not be part or the kidfuckers... dont know, just keep in mind, this is the best hope we have sadly.

Thanks for positing it.

The amount of anti Elon propaganda being pushed right now since he announced buying Twitter is hilarious. You're scared that your ideology will no longer be protected.

The law in America is the 1st Amendment. Any law contrary to that is null and void. I'm not sure if he understands that. This tweet is worded in such a way it makes me suspicious as well but it's probably nothing.

Just my $0.02 but when he talks about "laws" he's most likely referring to the only real line that matters in regards to "free speech" (At least in the US anyways) which is actual threats or calls to violence which of course are not free speech because they infringe on the freedoms of others.

It's a way to get in front of the drooling mouth breathers that like to repeat "Hate speech isn't free speech" when everyone with an IQ above room temperature knows that ALL speech no matter how vile is free speech. The line, Again, being threats/calls to violence.

Any law contrary to that is null and void.

And then they change the laws. Please do try to keep up.

Yep, all that stuff that Nazi Germany did was 'legal.' THey just changed the laws to make it legal.

I'm no expert on the subject but he will have to conform to at least the bare minimum standards for all 1st world countries if he wants the platform to continue existing in places like Germany or Canada where unfortunately, Freedom of speech objectively does NOT exist.

Not saying it's right or wrong, But obviously it's the most prudent move from a business standpoint. That said, There's no reason twitter in the US can't be full of 13/52 memes and all the JQ stuff if Elon is truthful to his word about "freedom of speech".

I just knew he was a fed! This confirms it.

going beyond the law is contrary to the will

Translates to...going beyond (the side most distant) the (natural) law is contrary (in ignorance) to the (free) will (of choice within natural law).

the word "freedom"...is defined by us

Aka the suggested word (freedom); which deceives others to ignore the perceived free-dom aka being "free" will of choice in response to the "dom"inance of balance.

Represents the use of "free" will of choice for SPEECH, noun - "the faculty (choice) of uttering articulate (perceived) sound (need) or (suggested) words (want)"

"insane person" represents suggested information; being "in sanus" (within sound) + "per sonos" (by sound) represents perceived inspiration, and adaptation to perceived sound implies the choice of resonance (need) or dissonance (want).

The protocols are fake and gay.

Stop you fucking nazi. Go back to the Democrats.

Until he fucks up. Then I won't.