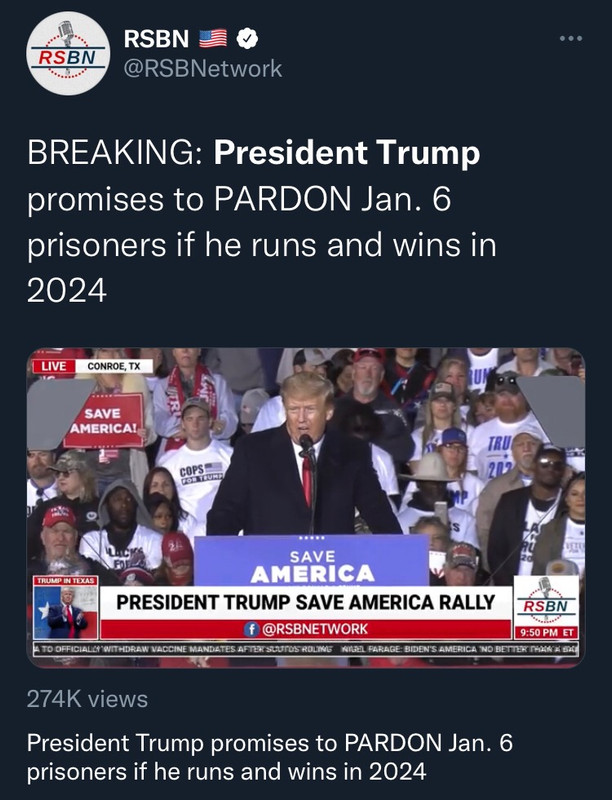 He already demonized them AND HE'S THE ONE THAT SET THEM UP! Smoothbrains will still willingly vote for him like he's some sort of hero. He helped galvanize the far left while leaving all exploits open and then set up people who thought they would save the country with his help. The first step to try saving the world on the political side is to dump Trump.

ppl are this stupid even for entertaining this idea.

you know what this does? he is legitimizing the fact they are in jail, aka the deep state narrative. Lol... meaning he is taking for granted they did something wrong...

only irredeemably stupid ppl would vote for Trump again.

Weren't they tried in court. Therefore the only thing he can offer them are pardons towards their sentence. Because it is called campaigning? Voting again, is irrelevant currently, anyway.

I’ve read that most of them haven’t been charged yet, much less tried in court.

I’m still not clear on why he summoned them there in the first place. “Will be wild.”

I thought trials were going ahead and that some sentencing has already been passed in certain cases? Isn't it a case by case basis per each individual? Possibly sentencing as traitors or terrorists, in the meantime I've heard they've put into very grim detention and confinement upon awaiting any such trials? Largely because it was still under senate review.

Isn't the court the highest power in America within domestic reasoning, its supreme's serve for life, passing law? It can supposedly indict the president. But the president also has the option of pardoning, sentencing.

The whole thing stinks. No answer. They believed they were right. They believed it was like the movies or god knows what. Most of them just followed, most just wanted to see the inside of Congress, taunting their opposition. They believed it failed them, their vote and voice didn't count. But there was accidents and there were certain criminals causing an attack against government. But ruling the rest as terrorists, because of some other notion of power, where is that justice? Without any other conspiracy and acts of perversion.

Here simple support, because he failed them. Simple campaigning promise for the purpose of trust and securing votes. Ultimately it has created a backlash something Trump often flips. But it means nothing until he is the president. Those odds are grim.

The conundrum you seek. The conspiracy. Will never be answered. Pawn to knight. In today's pandemonium offers another opportunity or distraction. Fairness, unheard of. It will crack the whip to pursue its agendas. Until who cares is becoming where it's faster at. No trust. No solution. Just a drum roll to it inevitably becoming worse. Look at what its cunts are offering us as our future?

Most of them haven't been tried in court. Most are being held "pre-trial" in basically an indefinite detention state (i.e. no right to a speedy trial). To make matters even more absurd, the charges against them are misdemeanors like trespassing which don't even carry jail sentences.

Thanks for the info.

If Ashli Babbitt was fake (I believed it for a whole year, not anymore), it would be possible that all these "prisoners" are also fake. Why didnt they let in Gaetz? MTG was let in, did a whole social media skit on it (the prisoners sounded chipper as hell) and even interviewed along-side Ashli Babbitt's mother....

Yes. Better vote Hillary 2024. She will fix everything. A name like Clinton is a name you can trust.

It's doesn't matter what avatar they hide behind. Hillary, Trump, Biden, Obama. The agenda gets furthered.

Voting is no different than that fake steering wheel you give to a 3 year old in the car to let them think they're driving.

Any other good candidates to keep an eye on? Some one we could start promoting?

I really don’t want trump again. He left too many unanswered questions and gave too much to Israel…

We should probably pick some other optional candidates to start researching and promoting before we have to deal with being fed from the trump political train. “Trump 2024! He’s going to save America! I mean who else are you going to vote for? Biden?,,,,,”

The elections are manipulated and the media propaganda is in overdrive. Realistically, I don't think any actual good candidate has a chance

Realistically, I don't think any actual good candidate has a chance

Never. How old are ppl here to not remember Ron Paul... And its not just because of MSM. Its because the ppl are brainwashed from early age into thinking a certain way, into repeating certain mantras... and a few of them only wake up when MSM and the cabal totally disregards those same mantras because they no longer serve their purpose.

most of this sub is this stupid