Conspiracies
Communities Topics Log In Sign Up
Sign In
Hot
All Posts
Settings
Win uses cookies, which are essential for the site to function. We don't want your data, nor do we share it with anyone. I accept.
DEFAULT COMMUNITIES • All General AskWin Funny Technology Animals Sports Gaming DIY Health Positive Privacy
41 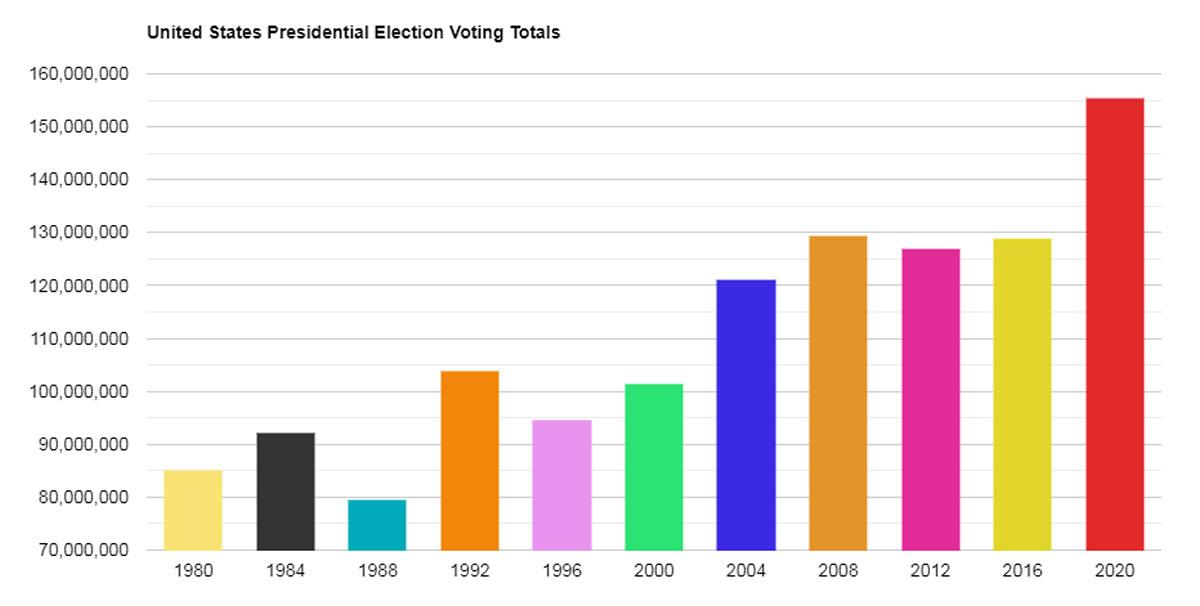 Can we get this compared to population?

With detailed variations of votes, and pop

TBF its very likely both sides cheated. One just far far more than the other.

Both sides cheated. They just both cheated to get Trump out of office...

Acknowledgement of the potential for fraud via mail in ballots certainly gave opportunity for supporters to commit some fraud to catch up.

Both sides are the same beast.

2002 was when Diebold (the ones who fucked up and were caught in the 2004 election) was sold everywhere.. guess who owns Diebold since then.. yep Dominion. It just changed names a few times.

Not gonna lie, I see "ayh" instead of "I" and I just downvote and move on.

Most dont know it happened

Hate to be a kill joy, but this chart doesn't say a whole lot.

For starters, the y-axis starts at 70 million rather than 0, distorting the whole chart; '20's red line should be twice the length of '80's tan bar, not 6 times longer. Secondly, there are 3 points on this graph where an election had over 20 million more voters than the previous election - '88-'92 gained 25 mil, '00-'04 gained 20 mil, and '16-'20 gained 26 mil; 2020 isn't really an outlier in that regard, especially when you overlay a general trend line showing a steadily increasing voter turnout every year. However, it is odd that the biggest jumps happen every time a Democrat wins the white house away from a Republican.

If you want to say something with these numbers, maybe compare the total number of votes with the census population data and the total registered voters for each year. You're far more likely to find some fuckery there, and it'll be a lot more convincing.

So then this graph is even worse because it doesn't even match the data you're pitching!

Like I said, at least including data on total population would significantly improve the argument. The table includes that and is far better than this graph.

You want to convince people with data? Maybe try to demonstrate the most basic of competency as regards to analyzing and visualizing that data and double check the work.

That table is fantastic. This Graph is embarrassing.

More people voted, must be fraud.

Voting participation has almost doubled since 1980. Eventually they are going to have 80-90-100% turn out. I wonder how that will be explained.

This graph doesn't show voter participation. All it shows is total votes.

True but the gain in total votes has outstripped population increase, so it means higher participation as well.

Explain it? Nah man, we just call it fraud if we lose and patriotism if we win.

So you believe enthusiasm for Biden existed? Really?

But enthusiasm to elect literally anyone but Trump? Definitely.

Hows that working out

And you actually believe the enthusiasm to "elect literally anyone but Trump" was the primary motivating factor to bring 26.6 million more voters to the poles than ever before? If you do, your username checks out.

Yup. You’re talking to one of those that had that motive, same with most of the people I knew who voted.

The opposite was what caused the capitol to be breached for the first time since 1814, so it’s not that far fetched. Of course, most of the Trumpers here seem to believe January 6th simply didn’t happen.

Well, according to this graph, 25 million more people voted in '92 than in '88, and 20 million more voted in '04 than in '00. 26 million isn't that out of place on this graph. This graph also doesn't tell me what the population is each election, or what the voter participation rate is. So as far as this graph shows, it's just the US population growing in spurts.

Maybe you made some typos? Maybe you'd like to add more data and context to your graph? This latest election has 99% voter turnout in some districts, which is more than Maduro and Castro ever had, and is a universally-recognized, guaranteed sign of fraud around the world.

Just pointing out that your argument is, literally, that increased voter turnout means fraud.

Pattern recognition states here that the relative curve is not natural.. growth is one thing but substantial growth and a substantial rate relative to previous data draws suspicion.

It’s not substantial restive to previous data though. Both the ‘88-‘92 and ‘00-‘04 cycles have significant growth that, when set relative to the voting eligible population at that time, is similar to the growth in ‘16-‘20.

Diebold is now owned by... yep.