Conspiracies
Communities Topics Log In Sign Up
Sign In
Hot
All Posts
Settings
Win uses cookies, which are essential for the site to function. We don't want your data, nor do we share it with anyone. I accept.
DEFAULT COMMUNITIES • All General AskWin Funny Technology Animals Sports Gaming DIY Health Positive Privacy
63 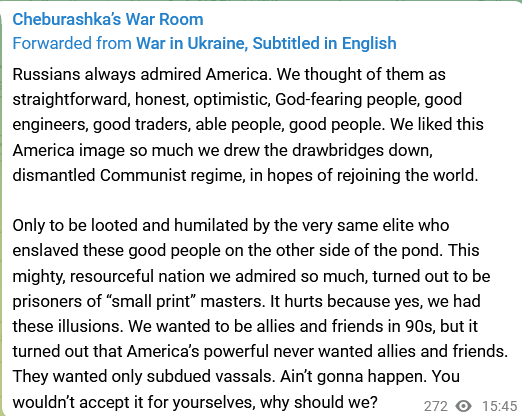 This reminds me of a similar sentiment from Iranian "terrorists", and also an example of how--yes, indeed--things can (almost) be erased from history.

In the the movie "Argo", there's the scene of a press conference given by the students out in front of the US Embassy after they had taken it over. It replicated an actual event, which I had remembered from the time it took place.

There was a big banner on the embassy wall behind them, and I was impressed that the filmmakers had included that detail. You can't quite see all the wording, so I went to look it up online.

It does not exist. Want to know why? Filling in a few missing words, the banner reads:

Oh no, not quite on message for a bunch of terrorists, is it?

You can get very partial glimpses of the actual banner in this documentary: American Embassy - Thames TV: Look from 1'25" to 3'22".

So the most complete record of this banner exists only in "Argo", at least in English. Which is all very ironic because "Argo" is about the CIA, made by the CIA, and starring a CIA asset. What a strange world we live in.

PS: Anyone else notice how terrorists have given up on press conferences, and even on making demands? They just attack people who are inconvenient to US and Israeli geopolitical objectives.