Conspiracies
Communities Topics Log In Sign Up
Sign In
Hot
All Posts
Settings
Win uses cookies, which are essential for the site to function. We don't want your data, nor do we share it with anyone. I accept.
DEFAULT COMMUNITIES • All General AskWin Funny Technology Animals Sports Gaming DIY Health Positive Privacy
35 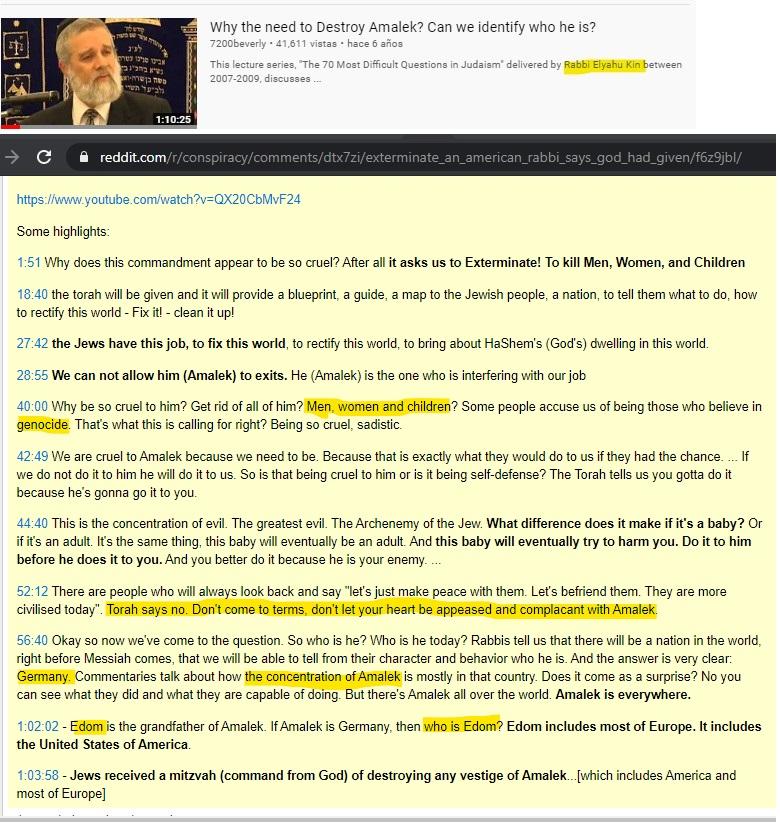 First, I would make the scholarly argument that "Amalek" originally referred to adherents to Satan It's an interesting and illuminating (haha) case, but quite long.

Of course, since Satan rules this world, the original meaning has been inverted, so that "Amalek" eventually gets used when pointing to someone or something that stands in the way of Satan's goals. See how neatly that holds together?

The Khazarians, generally being both intelligent and violent supremacists, gladly fill in all the connecting "logic" and "facts" of the inversion, and congratulate themselves on their moral superiority for thus saving the world.

It's part of the ritual, too.

So a guy trying to do good will not simply risk his life... At the very minimum he will be painted black in all ways possible by medias, a loony, a clown, a deranged, be judged evil by the people he wanted to help, then forgotten in a cell or "died resisting" or "cut his tongue in cell".

Inversion is the main principle in all of their modus.

It also works very well to demotivate "wannabe heroes" (as they would call fair people) and make them feel lonely. It's all the same game... like "our democracy" to make the cattle feel close on the same level while making sure the cattle hates his potential saviours. The potential saviour also see this in play and frankly says "really? And i'd risk all to save those that would readily scorn me for a voice? well wait a sec"

For the last couple of years I had the hypothetical question on my mind: how many people would do what they knew was right even if everyone else thought (because they were told) that they were the worst person in the world?

I never thought it would actually play out, but here we are with Putin and Ukraine.

I have been thinking the same thing as far as why should I even keep trying, the people are so dumb and enslaved against the truth. It is just not in me to give up so I continue to plot and post up signs exposing freemasonry etc, but it just feels so pointless in this world. Do you personally think our world is too far gone to save? It looks that way to me.

I think "fighting" cannot be upfront and that the only way it can be successful is through anonymous counter propaganda for now.

As you say, signs, leaflets, etc.

In the end until a decent majority of general population isn't hellbent at looking reality in the face there won't be change. Individuals standing up individually will be torn down. Small collectives will be infiltrated.

Only a world wide "mass awakening" (which takes time) can really change anything.

The fight would be... Apocalyptic i think, and right now it cannot even start.

We as a collective are still in the denial phase of trying to appease the bully as we try to understand he's a "troubled person" when in reality it's just pure psychopathy and things won't ever be better without intervention... And you can expect them to go much worse as a conflict is inevitable.

Some parts of this collective brain uderstand this (like here) and they should do what they can to send signals to the rest, but we can't "force" the happening, nor can an individual part take on the mission by itself.

They can invert the "right thing to do" and turn it to their advantage. This is thus the only "good thing left to do".

Wow. Great, high effort response. I really appreciate it. I just feel so alone sometimes in this war and that I should just start taking more and MORE radical action to at LEAST stop them. But you are right, they are so powerful that the only effective way is to raise huge numbers of people like us.. but i fear this is taking to long. I can tell many are waking up, but im afraid it's not happening near fast enough. I'll never give up spreading the truth that they hate so much, though. I hope the fight does happen soon. We are seriously running out of time.