Conspiracies
Communities Topics Log In Sign Up
Sign In
Hot
All Posts
Settings
Win uses cookies, which are essential for the site to function. We don't want your data, nor do we share it with anyone. I accept.
DEFAULT COMMUNITIES • All General AskWin Funny Technology Animals Sports Gaming DIY Health Positive Privacy
33 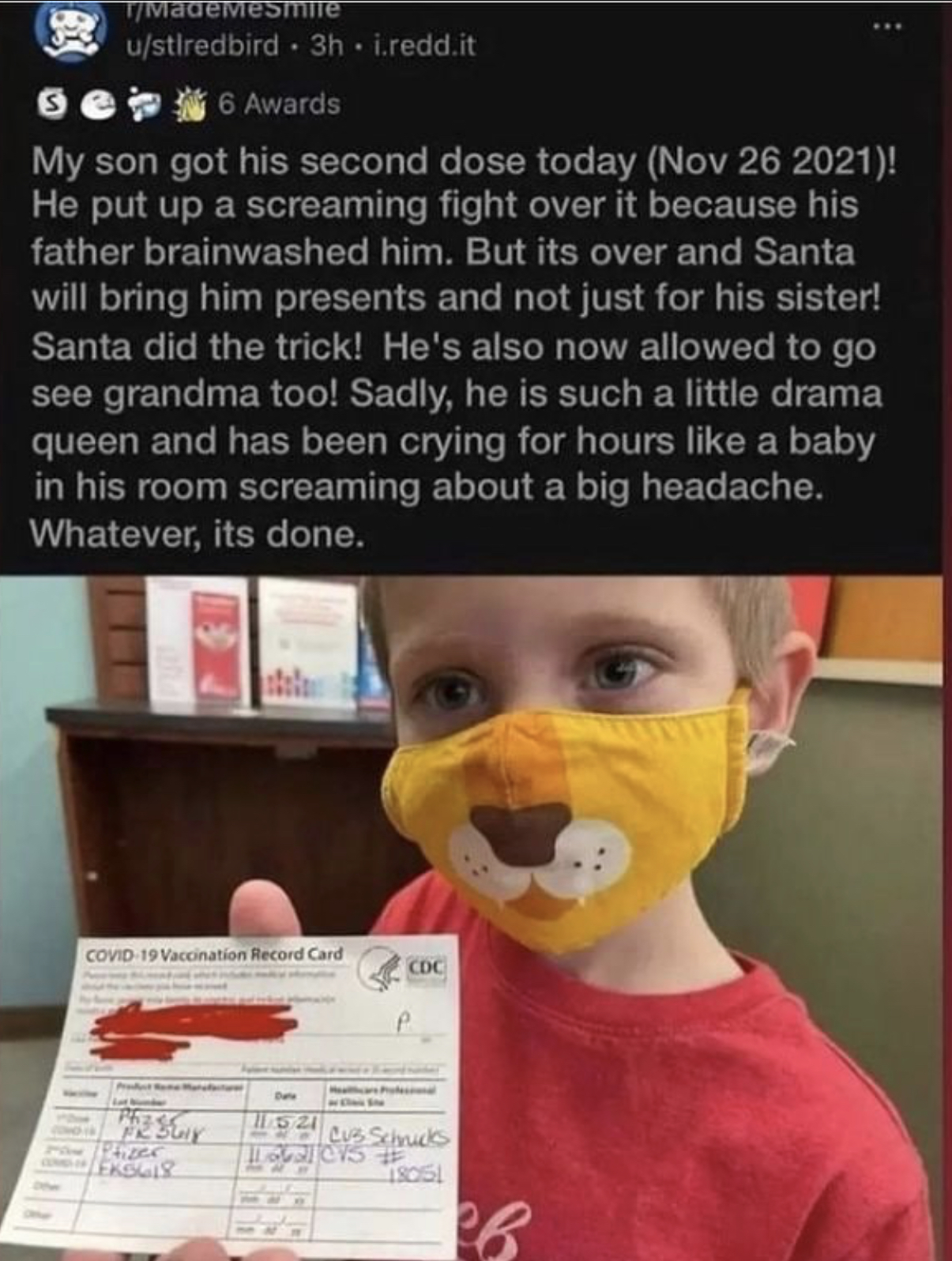 The kid died so the whore took it down, is what I would assume.

Clicked on one of the reddit links here and it sent me back to popular. Now u have super AIDS from accidentally reading a couple threads. Thanks.

The original seems to have been deleted because of the personal information that was on the card.

EDIT: Someone pointed out that it could also instruct people on how to make legitimate-looking fakes by following how it was filled out.

The Reddit user stlredbird claims this is a doctored image:

Another Reddit thread claiming to show the original image. The text is completely different.:

Thanks for the info. Even the original 'mild' text of keeping a kid from celebrating Christmas with family had he not been double jabbed is bad enough.

I know, right? It didn't strike me as a punishment, though, but rather the family following the advice from people they trust.

The "Santa did the trick!" idea is dangerous because it (once again) paints people who have not gotten the jabs as self-serving and needing some extrinsic motivation outside looking out for the welfare of others in order to voluntarily receive one. Remember when they were giving people Krispy Kreme doughnuts (literally every day), Budweiser beer and fast food as incentives for getting the jabs? That's because they care so much about people's health.

In the end this is easily-debunked disinformation to discredit the community of people sceptical about the mRNA shots. It goes on to backhandedly tell parents how to coerce their own children. This is some seriously sick propaganda.

Actually this picture is correct from the post. Check the original post's comments that confirm the headache, brainwashed, etc.

I don't think we're on the same page. The image has been removed, but I scrolled down quite a ways and didn't see those comments.

What I am trying to say is I don't know what you are calling "original."

Check the comments below the original post - they confirm the text showed in the picture here.

Just checked it in the comments and the text in this picture is correct, they changed it afterwards. Which shouldn't be done but... mods...

"So she offered her child up as a pharmaceutical test subject… for his own health. And then publicly ridiculed him by calling him a “baby” for crying in his room over a “Big headache”… that she clearly refuses to address and in no way is concerned for his health. 🤔🤨🤡 Ya’ll defending this is why those of us with a half a brain keep our kids as far away from the “village” as possible. The village seems to be overflowing with useful …."

"Im by no means an antivaxer, but this is just wrong. Especially not getting presents for Christmas unless he got it? Thats just wrong"

That's from the comments. You can check it and confirm for yourselves. https://np.reddit.com/r/MadeMeSmile/comments/r334m6/my_son_got_his_second_dose_today_christmas_with/

I think the retard is probably you for believing in this blatantly fake post, dude.

Comments in that thread give me hope for the future. People know this is wrong.

It's clearly real as you can check the comments below the post that confirm it.