Conspiracies
Communities Topics Log In Sign Up
Sign In
Hot
All Posts
Settings
Win uses cookies, which are essential for the site to function. We don't want your data, nor do we share it with anyone. I accept.
DEFAULT COMMUNITIES • All General AskWin Funny Technology Animals Sports Gaming DIY Health Positive Privacy
14

Funny to think every day for the last 30 years, "Oh man, a war with Russia could happen at any second." No.. wait.. thats not what we thought. We thought, fucking Arabs. Huh, seems like the ONLY people hyping Russia has been leftists/globalists. That shd tell you where Russia stands. (media.conspiracies.win)
posted 5 days ago by pkvi 5 days ago by pkvi +16 / -2 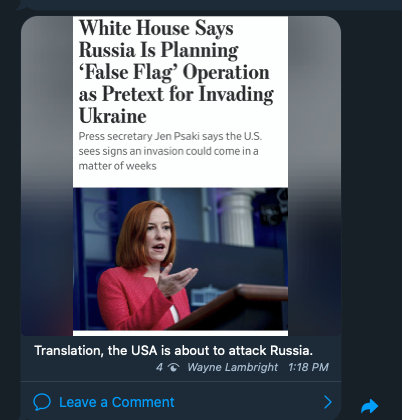 Look at Russia the past 30 ye..make it 10 years and compare that with the US. One has gained, the other has declined.

Only because of bad decisions made by serious fucking idiots.

If it happens over the ocean then I don't give a shit. That's the old world.

As a vet, I am imploring my fellow citizens - rein in the power of the federal government, including the military.

With leaders like these, and how we train soldiers. It's not a matter of 'if', but 'when' these leaders become so brazen in their auth/totalitarian mannerisms they will cause the proletariat to move.

"We are a Republic". We take the tools of many political theories and coalesce them to help form 'a Government of The People, by The People, for The People'. To have rules of law that do not allow Government and/or business subjugation, suppression or oppression of The People through political, economic or ideological means.

When this contract is broken, The People have been afford the means of reforming their government through either a vote, or if need be, purging those who defile our vote for their self interest to retain positions in corporations after serving in Government in an effort to control access of The People.

Then of course ayh will get the Putin and the Jews thing so.. yeah probably just engineered war for $ and first world sabotage.

That is really whatever everything feels like it is --> sabotaging first world countries so they are beaten into globalist compliance.

But its not going to work, Klaus. Msg me and ayh will let you know why.

havent you learned by now?

if anything BAD happens in the world, it's because of russia!

if anything GOOD happens in the world, it's because of the usa!

When in doubt, blame the ruskies.

That is the worst part.. some of the scams are just lazy. We live in a higher spectrum of collaboration of conversation so their plots shd have a bigger pizzazz .. but no, we get flu and Russia.

...is why ayh started a war