I’m convinced everyone is in cahoots together. First one premier announces mandatory vaccination for all jobs that you have contact with the public. Then the next premier. Within 3 days the whole country has decided mandatory jab for jobs, basically. One premier goes so far as to have mandatory jab if you’re “someone who may have contact with someone in a face to face setting OR works in a field that is essential”. So basically you can be an electrical lineman working on power poles, but because your job is essential, you have to have the jab, despite no human contact. It’s been one week and now our grocery stores have confirmed all staff must be jabbed. Our sporting leagues have confirmed all players must be jabbed, all fans must be jabbed. I don’t know who is organising this but I’m telling you: someone is. This is not organic. Oh yeah, mandatory boosters too. And please, please don’t tell me that it’s time to “fight back”. Unless you’re a non-American you have no fucking idea what it’s like to live in a place where the police are given the same shit Spec ops guys have, while citizens can’t even carry pepper spray. 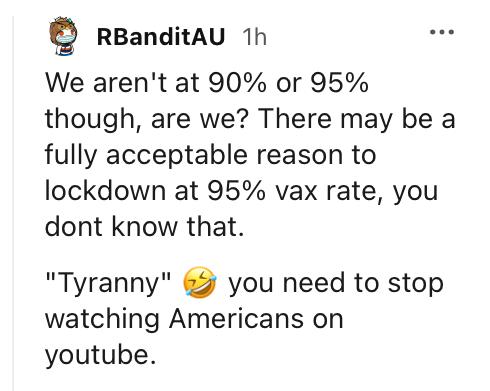 I’m a no new normal guy. Like most of you I think this is insane. BUT, BUT. Before we go any further is it possible that our world governments were genuinely trying to protect us?

Here is my attempt at giving benefit of the doubt : Mossad, CIA, M15 etc all heard chatter that China was planning a bio attack. Wuhan flu happens. Governments freak the fuck out, thinking “good God they’ve done it! The Chinese have enacted The Final Solution! It’s the Fourth Reich! Everyone but the Chinese are gonna die!!”. So governments go crazy, lock shit down, trample rights etc (and can’t tell us what’s happening lest we have mass panic).

After around 2 weeks governments realise Covid is nothing much. It ain’t the one. But if they come outright and say “guys, Covid is just the flu. We panicked because we heard the Chinese were trying to take over the world and we thought they were gonna genocide y’all. They still might.” well you’re not longer in a Cold War with China. It’s fucking red hot. So governments are sort of going along with this bullshit because the alternative is accusing an insane country of genocide.

I know this is doubtful. Thoughts?

Ok, so we’ve got bones for dinosaurs or whatever. But apparently only retards believe dragons existed? Well fuck you! Maybe you’re the retard!

Let’s begin. When you think about how dragons are represented, what are they? Pretty much just giant flying crocodiles right? So, it stands to reason that dinosaurs lived, then died out, then after a while humans just sort of evolved from.. nothing or whatever, apparently some cells evolved. Cool. So anyway, I guess a bunch of cultures that had crocodiles and alligators near them just kinda added wings and fire and made up the dragon. So cultures like the Australian aborigines, native Americans, Phillipines, Africa..and the Welsh? And the Chinese? And the English?

This doesn’t make any sense. How are these ancient myths from cultures all over the world, that would have had almost no interaction with each other all copied each other and came up with the same shit? “Terrifying, scaly, four legs, big fangs, spat fire, could fly”. These have to be based off legit experiences.

Think of the Gorilla, doesn’t even sound real, sounds like made up bullshit, but it’s real as fuck.

As for “breathing fire” the Komodo dragon produces venom in its mouth that will fuck you up son.

For me, I’m kind of open to anything now. In 2018 if you tried to tell me that The Nazis and The Vatican are in cahoots and built a giant bunker in Antartica to cover up that the earth is flat I’d be like “bro, maybe just stick to 911” but now? After seeing almost every government on the planet synchronise and oppress us as a team? There’s nothing too far fetched.

Now, in recent years I’ve begun noticing thing. I think almost all of us have, otherwise we’d be ..redditors shudders. Every time someone is this truly awful, deranged, left wing piece of shit I check their early life biography and .. yep, every time. It’s statistically too much, it ain’t a coincidence. But then so many of y’all are Christians. What’s with that? Why were the Jews of the Bible so different? Jesus, Paul, Peter etc. none of these guys were walking around going “ugh, we white people must do better!” or “yeah, I don’t really do gender. Like, if you MUST gender me, I prefer xhir”. And Jesus HIMSELF tends to be quite redpilled on the jq. I’ve heard conspiracies that there the main modern Jews, the ashkenazi, are fake Jews? That they are actually Kazars or something? Any help would be great

I’ve had family members beg me to get the jab. “Please, you have to! I know you’re not scared of Covid but don’t you wanna travel?? If you don’t get vaccinated you won’t get to travel!!!”. I don’t believe it. I’m at the point where I’m genuinely willing to be vaccinated. I’m broken. Just fucking give me the fucking vax, I don’t care. But there’s no point. I can surrender and let evil win. But that still won’t be enough. My country, Australia has announced that apparently the goal posts have moved again. It used to be 80% of over 16’s vaccinated and we open up. Apparently the new sciencey data shows that if we did that there literally wouldn’t be enough land in the Outback to bury all the Covid bodies. This Delta just has to many delta atoms or something. It’d be a disaster, the science says so. We now need 80% of Australians over five to be double vaxxed, plus a booster every 6 months. If I thought I could be a Christ like figure and sacrifice myself to satisfy their cruelty lust I’d do it. I’d take 60 million vaccines if it’d mean freedom for my people but it won’t. This will never end.