Win / Conspiracies
Win
Communities Topics Log In Sign Up
Sign In
Hot
All Posts
Settings
Win uses cookies, which are essential for the site to function. We don't want your data, nor do we share it with anyone. I accept.
DEFAULT COMMUNITIES • All General AskWin Funny Technology Animals Sports Gaming DIY Health Positive Privacy
24

Member when patriots.win boycott Fox News? Why are there so many Tucker and Gutfield and muh pres interview with xyz on Fox there? Trump supporters are being played like a fiddle. (media.conspiracies.win)
posted 7 days ago by pkvi 7 days ago by pkvi +27 / -3 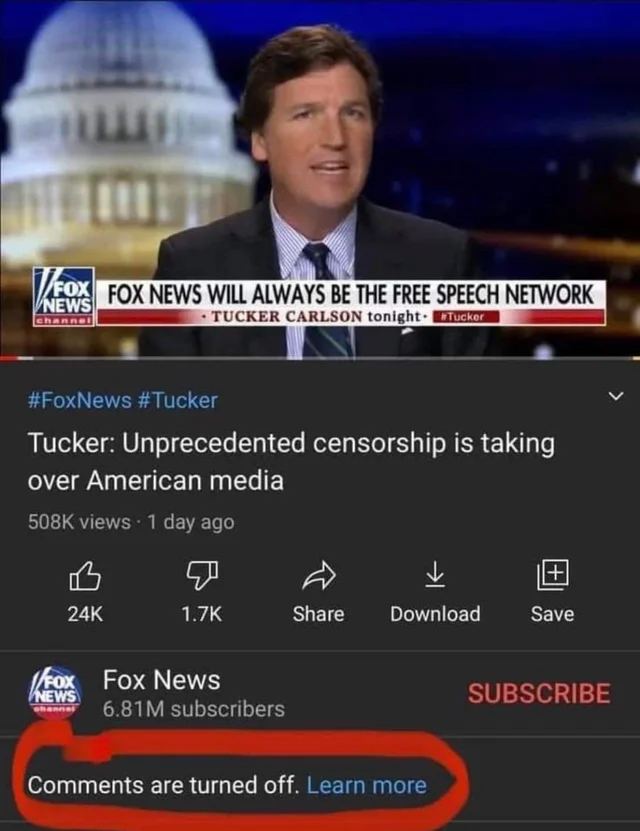 Keep up the boycotting. Fox sucks and is not your friend.

To the always Trumpers who will be upset.. your inability to have some personal integrity and AT LEAST distrust Trump for his past (Epstein, Israel, Iran, Jan6, Vaccine, Fauci....) so as to look for better options is reason for me to hate you as much as the left

Why would you hate a group of people who voted for trump wouldn’t you want to turn the hatred on those in power that built the stage!? To all the people turning on their neighbors take a step back and look at who’s manipulating your energy.

Who's your better option? Another career politician?

Doesn't the fact that the entire Dem, MSM, Gov apparatus was weaponized against Trump to the point where an election was undeniably stolen from him indicate to you that he may not be the bad guy?

He has made mistakes, appointed corrupt people like Fauci to roles that they had no business being in, ran up more debt, etc. but you can only be as good as those advising you.

Point being that though he's imperfect, he fought for conservatives where others abandoned us.

“Everyone hates him so he must be good!”

If I recall correctly, he abandoned the fuck out of you retards on January 6th.

No, not everyone hates him. The right people hate him.

Big difference. I'm not the retard that voted for a pedo dementia patient who's been in Washington for 47 years.

Sounds like you voted for a pedo career democrat who realized the morons on the right were easier to grift so he became a fair weather republican. Yeah, bankrupt gameshow host was a great choice. He reeeeeeeeeally made America great again, huh? Like I said.....retards.

No evidence of pedo, unlike with Feely Joe. He was undeniably a nationalist that fought for the people of this country where his predecessor brought stagnation and weakness.

His policies brought the best economy in history, and expanded the middle class.

How embarrassing for you of all people to call anyone a retard.

Good, you should be embarrassed. I’m glad you can admit it.

Lol sure dude. Have a good night libtard!

True he bitched out but up till then he did a great job for everyone. The Democrats even fuck there own.

Oh yeah, America is much better off now thanks to Drumpf........how?

Was going great till the election got stole.enjoy your war and taxes

If Trump was on their side, they wouldn't have had to expose so much of themselves in the process of defeating a plant.

Fuck off.trump did right by me and everybody.

They literally had a point until they praise Putin's vaccines for some reason.

I rarely see anything from Fox on there anymore aside from the Trump interviews, because Trump, duh. And even that was because it was like the first time he spoke after he left office.

We don't all think the same. Some people like Tucker, and some don't. That's okay. By the way, they turn off comments because of YouTube policy, which is that they're responsible for all of the comments. It's stupid but YouTube forced censorship on everyone.

The DNC and Trump played EVERYBODY! I am still laughing my ass off at all of the lemmings!

Are you saying the the DNC and Trump were in cahoots together? Because if you are, that's just stupid.

How can it be stupid when the proof is in a John Podesta email with the DNC.

QUESTION EVERYTHING, including any party loyalty.

There are not two parties. That is simply an illusion.

Changing a blue tie for a red one does not make him a legitimate republican.

This tactic has been in play since Woodrow Wilson.

Need to do some research fren.

You need to rethink your premises, don't start that lame crap about "doing your research". He was a populist, and could has just as easily ran as a Dem as a Republican. Democrats, at one time, used to be America first when it came to trade, before the neocons took over the GOP they were as well. Know your history.

So, answer me these three questions. If Trump was given power by the Dems in some sort of dirty deal in 2016, why was nobody in the Democrat Party aware of it at the highest levels, namely Hillary the 2016 nominee. Secondly, why did the entire Democrat/media establishment go apeshit for 4 years when he did win. And why did they allow, for 4 years, the GOP to reward their friends with all the tax payer pork, and punish blue states with ending the SALT cap?

Politics is about "who gets what". It's about POWER fren, and the Democrats don't give up power willingly, ever.

You "Trump was a psyop" people are so sad, it's your way of dealing with the election being stolen from him....rather than get mad a Democrats for doing it, or Trump for not crossing the Rubicon, you rationalize away your anger by saying he was fake from the start. He was good on some things, and bad on others, but he was not some fake.

But he didn’t push the Democrat platform when he was in office. When he was a Democrat they were still anti immigration and anti gay marriage, he left when Obama entered and the progressives came to forefront of the party.

That email does not mean what you think. In the context of the email, he is referring to them as radicals leading people to the Republican Party, not as controlled opposition. He is saying the messaging with them should be that they will lead you to your doom because the whole party is as radical as they are.

The email is not the smoking gun. The pdf attachment is. Have that pdf.

Yeah I know that, the part I am referring to is in the pdf. The email text doesn’t mention Trump at all. And it’s pretty clear about what he’s saying when he calls them that. You are applying the controlled opposition context, and perhaps sometimes that is what that means. But he explains why he wants to portray them that way. Why would he want to portray them as controlled opposition? That would defeat the purpose and doesn’t make any sense. You can say he failed on some levels, but he was not on the same team.

Yup, I'm laughing and I was played. At some point, you have to look in the mirror and realize you were conned.

Good for you. Seriously.

If more people took this position, we might actually be able to come together.

People that now believe Trump was working for the DNC have no credibility. They went from believing one retarded narrative fed to them from psyop campaigns (like Trump is the savior) to the exact opposite (Trump is Satan.) Anytime your beliefs flipflop between extremes in such a short time frame you should question what's really happening.

Conspiracy theorists are just people with a long memory (and can connect cause/effect relationships).
Normies have short attention spans.