Win / Conspiracies
Win
Communities Topics Log In Sign Up
Sign In
Hot
All Posts
Settings
Win uses cookies, which are essential for the site to function. We don't want your data, nor do we share it with anyone. I accept.
DEFAULT COMMUNITIES • All General AskWin Funny Technology Animals Sports Gaming DIY Health Positive Privacy
34

Worth pointing out that "back to normal" propagandizes back to a place where we are so easily manipulated into ab-normalities. Earnest normal is none of what we presently aspire to. (media.conspiracies.win)
posted 8 days ago by pkvi 8 days ago by pkvi +34 / -0 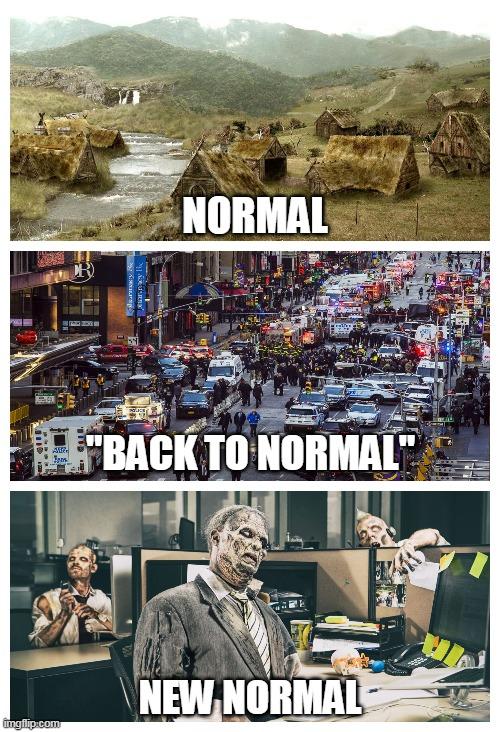 forward to good? Normal , no thanks, Covid woke me up. I want to live in a garden called Paradise, it is possible, but not without Jesus.

Cheers! That is the only important thing. God is good!

Isn't the "normal" picture what the globalist tyrants aspire to with their Georgia Guide Stones depopulation agenda?

Nay.. bcz then tyrants would no longer hold the status of tyrants and above all things, despite their depopulation agenda, they will not abandon power. Never ever ever never not ever... as evidenced by they thinking they know whats best for you

I am reading Steppenwolf by Herman Hesse now, and He had an interesting statement that made me think.. If people from the 90's were thrust into medieval times, they would think it to be absolutely horrendous, and horrible, and violent, and even ungodly..

But the peasants living in the time of Medieval days would think the same about the 90's, and they would think there own time to be normal, and peaceful, and just right.. sure not perfect, but good enough.

The point being made was that any one that lives in one civilization and then in another, will automatically believe the new system to be barbarous,.. and especially us who live in a transition phase from old normal, to new normal.. will this new normal be horrible.? Yes , without a doubt.. But what will our childrens children think of the new inherited age? Perhaps they will look on the 90's of a time of great desperation, and horrors.

The human can get used to almost anything, but there is still an ideal civilization.. one free from a large state, and much technology is likely the best.. whatever society is most in alignment with nature, without sinking to the level of Savage, is closest to the best way of life.

The human can get used to almost anything, but there is still an ideal

The human can get used to almost anything (adaptation to motion aka magnetic sustaining itself through electric), but there is still an ideal (balance in motion aka electric flow establishing magnetic sustenance).

they would think there own time to be normal

Upholding loss about that which was (past); creating stress in the substitute one then believes is (present), while ignoring that which really is (motion).

one that lives in one civilization and then in another, will automatically believe the new system to be barbarous

That's because the few who control the many are using civilization (chain of command caste system) to civilize; to domesticate their slave subjects. Terms like barbarous (things foreign) or animalistic (air, breath, soul) are used as rhetorical suggestions to trick us to ignore inspiration gained from perceived differences; adaptation to instincts; and the conscious communication between perception and choice based comprehension.

Domestication represents the isolation from natural perception; the transhumanist agenda of switching 1 (natural reality) with 0 (digital fiction) aka inversion through suggestion. The normal as you put has (fiction) has to be constantly promoted; which will deceive the slaves to perceive all else as foreign and hostile to normalcy.

will this new normal be horrible.?

The stress (present); from upholding loss (pass), now tempting fear/hope (future)...all based on consent to the suggestion of time...a measurement of motion; tricking one to ignore motion.

DOUBT, verb intransitive - "to fear". A direct contradiction to the "horrible" prediction beforehand.

what will our childrens children think

These children represent the consequences of the actions one is right now ignoring to take responsibility over, while contemplating about what they might think aka ignoring that which is for that which might be aka ignorance of motion (reality) in favor of fiction (belief).

one free from a large state

No such thing...the state (condition) of ONE is within ALL (energy in motion).

much technology is likely the best

TECHNOL'OGY, noun [Gr. art, and word or discourse.]. See, they even tricked us to worship the term "technology", while ignoring what the natural connotation is...a belief (ignorance aka fiction) based description of creation (transmutation). Technology today represents the fruits of ones labor; controlled by another aka ones choice of ignorance towards the consequences of ones actions.

most in alignment with nature

All the ONEs within the ALL are in momentum; in balance; they are demanded to adhere to that balance (magnetic) within the motion; electric flow; natural order of ALL.

"most" represents the want (temptation) to claim ownership over others, while ignoring the coexistence within ALL.

the level of Savage

Once again proclaiming from within the state of domestication; ones believed superiority over all others; over those savages (uncultivated)...one sentence after proclaiming the best state to be the ones "most in alignment with nature".

closest to the best way of life.

The "closest" path to ALL represents ONEs choice based comprehension.

It is my fondest wish that when MAP reaches the level of "acceptance" in the mainstream that transtrenderism has, that people will finally chimp out and take their rights back bamn.

masks are missing in the new normal pic